The Ultimate Threat to Nations 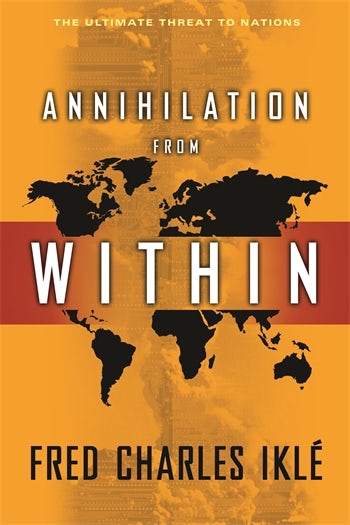 The Ultimate Threat to Nations

In this eloquent and impassioned book, defense expert Fred Iklé predicts a revolution in national security that few strategists have grasped; fewer still are mindful of its historic roots. We are preoccupied with suicide bombers, jihadist terrorists, and rogue nations producing nuclear weapons, but these menaces are merely distant thunder that foretells the gathering storm.

It is the dark side of technological progress that explains this emerging crisis. Globalization guarantees the spread of new technologies, whether beneficial or destructive, and this proliferation reaches beyond North Korea, Iran, and other rogue states. Our greatest threat is a cunning tyrant gaining possession of a few weapons of mass destruction. His purpose would not be to destroy landmarks, highjack airplanes, or attack railroad stations. He would annihilate a nation's government from within and assume dictatorial power. The twentieth century offers vivid examples of tyrants who have exploited major national disasters by rallying violent followers and intimidating an entire nation.

To explain how we have become so vulnerable, Iklé turns to history. Some 250 years ago, science was freed from political and religious constraints, causing a cultural split in which one part of our culture remained animated by religion and politics while the other became guided by science. Since then, technological progress and the evolving political order march to different drummers. Science advances at an accelerating pace while religion and politics move along a zigzag course. This divergence will widen and endanger the survival of all nations.

Drawing on his experience as a Washington insider, Iklé outlines practical measures that could readily be implemented to help us avert the worst disaster.

The great value of Mr. Iklé's book: to make us consider the worst. Walter Laqueur, The Wall Street Journal

Should be on every Pentagon reading list. Austin Bay, Washington Times

A sobering exploration of the perils of progress. Eric Cohen, Weekly Standard

A book that should be read by every serious citizen, especially those responsible for our national security. R. Emmett Tyrrell, Jr., American Spectator

What This Book Is About
1. Mankind's Cultural Split
2. Science Pushes Us Over the Brink
3. Five Lessons of the Nuclear Age
4. Annihilation from Within
5. Time to Get Serious
6. Restorations
Notes
Acknowledgments
Index

Fred Charles Iklé was undersecretary of defense for policy during the Reagan administration and served Presidents Nixon and Ford as director of the U.S. Arms Control and Disarmament Agency. In 1999 he was a member of the National Commission on Terrorism and in 2001 he became a member of the Pentagon's Defense Policy Board. He is a Distinguished Scholar at The Center of International and Strategic Studies in Washington, D.C., and is the author of several books, including Every War Must End (Columbia) and How Nations Negotiate.