Anthropologists in the Field 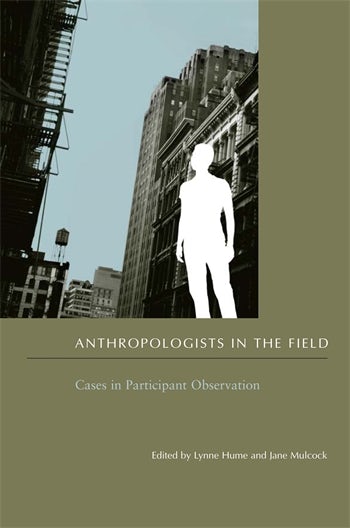 Anthropologists in the Field

All too often anthropologists and other social scientists go into the field with unrealistic expectations. Different cultural milieus are prime ground for misunderstandings, misinterpretations, and interrelational problems. This book is an excellent introduction to real-world ethnography, using familiar and not-so-familiar cultures as cases. The book covers participant observation and ethnographic interviewing, both short and long term. These methodologies are open to problems such as lack of communication, depression, hostility, danger, and moral and ethical dilemmas—problems that are usually sanitized for publication and ignored in the curriculum. Among the intriguing topics covered are sexualized and violent environments, secrecy and disclosure, multiple roles and allegiances, insider/outsider issues, and negotiating friendship and objectivity.

The co-editors of this work have done a marvelous job. James T. Richardson, Anthropological Forum

Positioned Engagement
Awkward Spaces, productive places: the ethnography of participant observations, by Lynne Hume and Jane Mulcock
Ethical Engagements
Awkward Intimacies: Prostitution, Politics, and Fieldwork in Urban Mexico, by Patty Kelly
Multi-sited Engagements
Disclosure and Interaction in a Monastery, by Michael V. Angrosino
Going Beyond "The West" and "The Rest": Conducting Non-Western, Non-Native Ethnography in Northern Thailand, by Ida Fadzillah
Multiple Roles, Statuses and Allegiances: Exploring the Ethnographic Process in Disability Culture, by Russell Shuttleworth
He's Not a Spy, He's One of Us: Ethnographic Positioning in a Middle-class Setting, by Martin Forsey
Dissent and Consent: Negotiating the Adoption Triangle, by Jonathan Telfer
Doing Ethnography in 'One's Own Ethnic Community': The Experience of an Awkward Insider, by Val Colic-Peisker
"And I Can't feel at Home in this World Anymore": Fieldwork in Two Settings, by Jim Birckhead
"Yo, bitch..." and Other Challenges: Bringing High-risk Ethnography into the Discourse, by Sylvie C. Tourigny
Reflections on Fieldwork Amongst Kenyan Heroin Users, by Susan Beckerleg and Gillian Lewando Hundt
Closed Doors: Ethical Issues with Prison Ethnography, by John M. Coggeshall
Living in Sheds: Suicide, Friendship and Research Among the Tiwi, by Gary Robinson
Performing and Constructing Research as Guesthood in the Study of Religions, by Graham Harvey
Not Quite at Home: Field Envy and New Age Ethnographic Dis-ease, by Stewart Muir
Multi-sited transnational ethnography and the shifting construction of fieldwork, by Sawa Kurotani
Multi-sited Methodologies: "Homework" between Australia, Fiji and Kiribati, by Katerina Martina Teaiwa

Lynne Hume is associate professor in The School of History, Philosophy, Religion and Classics at the University of Queensland, Brisbane.

Jane Mulcock is a postdoctoral fellow in anthropology and sociology at the University of Western Australia.