Architecture Is All Over 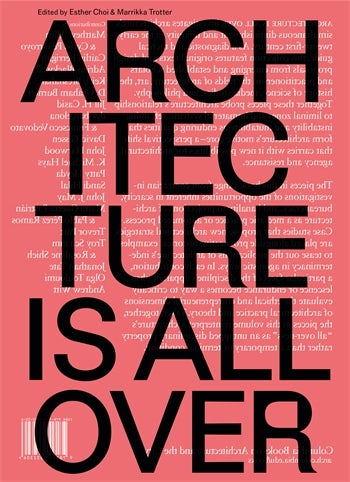 Architecture Is All Over

Architecture Is All Over investigates architecture's simultaneous diminishment and ubiquity in the early twenty-first century. As a diagnostic and tactical guide, this collection features original texts and design proposals from emerging and established scholars and practitioners in the fields of architecture, art, the history of science, media studies, and philosophy. Together these pieces probe architecture's relationship to liminal zones and immaterial systems, reframing instability and mutability as enduring qualities that form architecture's motive core—a perspectival shift that carries with it new possibilities for architectural agency and resistance.

The pieces in this book range from contrarian investigations of the opportunities inherent in scarcity, bureaucracy, and banality to projections of architecture as a mediatic practice or automated process. Case studies that propose new architectural strategies are placed alongside provocative historical examples to tease out the implications of architecture's indeterminacy in agonistic ways. In each contribution, a particular facet of the discipline's apparent obsolescence or endurance becomes a way to critically evaluate the ethical and entrepreneurial dimensions of architectural practice and theory. Taken together, the pieces in this volume reinterpret architecture's "all-over-ness" as an untapped disciplinary property rather than a temporary or terminal condition.

Marrikka Trotter is a Ph.D candidate in architecture, urbanism, and landscape at Harvard University. With a background in architectural practice and site-responsive art, Trotter has taught at Harvard University and Boston Architectural College and is a guest critic at Northeastern University, the Massachusetts College of Art and Design, Wentworth Institute of Technology, and the Massachusetts Institute of Technology. Her writing has appeared in publications such as the Harvard Design Magazine, Log, and Big Red & Shiny.
Choi and Trotter previously edited the volume Architecture at the Edge of Everything Else (MIT Press, 2010).