As Wide as the World Is Wise 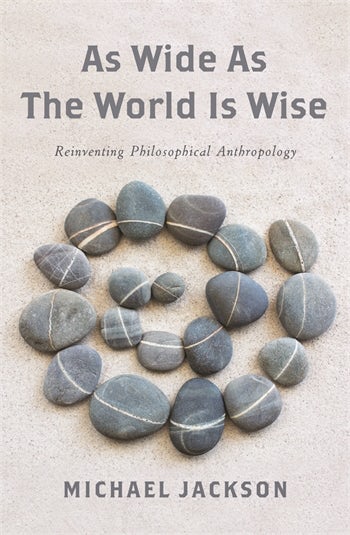 As Wide as the World Is Wise

Philosophy and anthropology have long debated questions of difference: rationality versus irrationality, abstraction versus concreteness, modern versus premodern. What if these disciplines instead focused on the commonalities of human experience? Would this effort bring philosophers and anthropologists closer together? Would it lead to greater insights across historical and cultural divides?

In As Wide as the World Is Wise, Michael Jackson encourages philosophers and anthropologists to mine the space between localized and globalized perspectives, to resolve empirically the distinctions between the one and the many and between life and specific forms of life. His project balances abstract epistemological practice with immanent reflection, promoting a more situated, embodied, and sensuous approach to the world and its in-between spaces. Drawing on a lifetime of ethnographic fieldwork in West Africa and Aboriginal Australia, Jackson resets the language and logic of academic thought from the standpoint of other lifeworlds. He extends Kant's cosmopolitan ideal to include all human societies, achieving a radical break with elite ideas of the subjective and a more expansive conception of truth.

As Wide as the World Is Wise is a book that gives any soul tortured by questions arising from the way the world is today a feeling that one has found an author who has heard the torment of such a soul and has offered instructions on how to live with these questions, not because they have been solved but because these questions have been heard without recourse to sentimentalism or quick-fix solutions. Veena Das, coeditor of The Ground Between: Anthropologists Engage Philosophy

Jackson's marvelous book delivers ethnographic evidence for philosophical issues originating from the necessities of ordinary life, reminding us that philosophy actually never was (just) a matter of academic discourse and abstract thinking but has always been rooted in various media—myths, tales, rites, sayings—that express the diversities of life-forms, their norms and values, and their existential truths and wisdom. Thomas Schwarz Wentzer, Aarhus University

At a time when anthropologists are increasingly drawing on and engaging with philosophy and philosophers, Jackson has given us the best account thus far of how this might be possible. Eschewing the common anthropological criticism that philosophy is too universalizing and abstract, Jackson shows us how in our time much philosophical practice is an attempt to think through the immediate and pressing issues of everyday existence. Anthropology, Jackson argues, is perfectly positioned to contribute significantly to such thinking. The result is an important and innovative articulation of a potential philosophical anthropology. Jarrett Zigon, author of Morality: An Anthropological Perspective

Acknowledgments
Introduction
1. Analogy and Polarity
2. Identity and Difference
3. Relations and Relata
4. Matters of Life and Death
5. Ourselves and Others
6. Belief and Experience
7. Persons and Types
8. Being and Thought
9. Fate and Freewill
10. Center and Periphery
11. Ecologies of Mind
Notes
Index

Michael Jackson is Distinguished Professor of World Religions at Harvard Divinity School. He is the author of the prize-winning Paths Toward a Clearing (1989) and At Home in the World (2000). His most recent books include Between One and One Another (2012); Lifeworlds: Essays in Existential Anthropology (2012); The Other Shore: Essays on Writers and Writing (2012); and Harmattan: A Philosophical Fiction (Columbia, 2015).