Asian and Feminist Philosophies in Dialogue 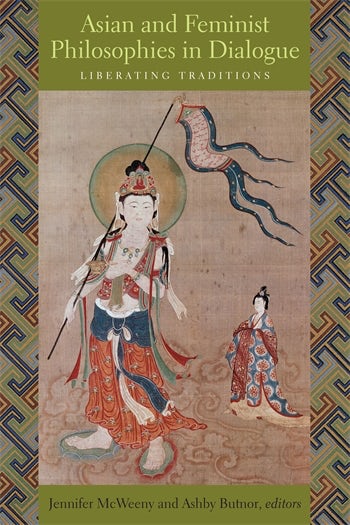 Asian and Feminist Philosophies in Dialogue

In this collection of original essays, international scholars put Asian traditions, such as Hinduism, Buddhism, Daoism, and Confucianism, into conversation with one or more contemporary feminist philosophies, founding a new mode of inquiry that attends to diverse voices and the complex global relationships that define our world.

These cross-cultural meditations focus on the liberation of persons from suffering, oppression, illusion, harmful conventions and desires, and other impediments to full personhood by deploying a methodology that traverses multiple philosophical styles, historical texts, and frames of reference. Hailing from the discipline of philosophy in addition to Asian, gender, and religious studies, the contributors offer a fresh take on the classic concerns of free will, consciousness, knowledge, objectivity, sexual difference, embodiment, selfhood, the state, morality, and hermeneutics. One of the first anthologies to embody the practice of feminist comparative philosophy, this collection creatively and effectively engages with global, cultural, and gender differences within the realms of scholarly inquiry and theory construction.

A serious yet creative examination of current feminist theories as they may be applied to or refined through Asian philosophical and religious perspectives. I know of no edited volume that considers such a wide range of Asian philosophies in a feminist light. Erica Fox Brindley, Pennsylvania State University

McWeeny and Butnor introduce a set of essays that each in its own unique way argues for a capaciousness that rises above the exclusionary repressions and ignorings of our more familiar philosophical approaches. In its collaboration between the liberating practices of diverse Asian traditions and feminist philosophy, this methodology takes as its ultimate goal the philosophical flourishing needed to prevail over the suffering and oppression that continues to trouble our contemporary world. Roger Ames, University of Hawai'i

This path-finding book exhibits a subtle awareness of a cross-fertilization between empowerment of gender and inclusion of diverse voices in philosophy. A valuable and meaningful resource for rediscovering our own intellectual landscape. Robin R Wang, Loyola Marymount University

This collection performs in practice what numerous feminist philosophers have called for in theory—an exercise in world-traveling. Readers will find rich debates on multiple traditions and texts in Asian philosophy as well as innovative and wide-reaching essays on religion, epistemology, care ethics, free will, and subjectivity. A must read. Linda Martín Alcoff, Hunter College

Lively and readable, this rich volume firmly establishes feminist comparative philosophy as an important field for inflecting gendered perspectives a crosscultural context. Above all, Asian and Feminist Philosophies in Dialogue makes Asian thought a significant player in that conversation. This is a dynamic collection in service of the highest aims of philosophia--gaining wisdom and giving voice to thoughts yet unheard. Anne Carolyn Klein (Rigzin Drolma), author of Meeting the Great Bliss Queen: Buddhists, Feminists, and the Art of the Self and Heart Essence of the Vast Expanse

Ashby Butnor teaches philosophy and religion at Metropolitan State University of Denver and serves as the faculty coordinator for Learning Communities and First Year Success. Her research focuses on ethics, feminist theory, phenomenology, Buddhism, East Asian philosophies, comparative methodologies, and philosophical pedagogy. She earned her doctorate from the University of Hawai'i, Manoa.