The Middle East and the Challenge to the West 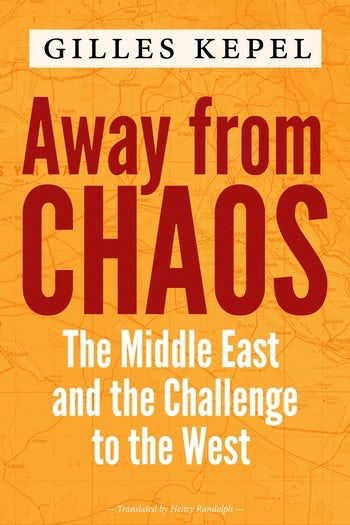 The Middle East and the Challenge to the West

The Middle East is one of the world’s most volatile regions. In recent years, from the optimism and then crushing disappointment of the Arab uprisings through the rise and fall of the Islamic State, it has presented key international security challenges. With the resilient jihadi terror threat, large-scale migration due to warfare and climate change, and fierce competition for control over oil, it promises to continue to be a powder keg. What ignited this instability?

Away from Chaos is a sweeping political history of four decades of Middle East conflict and its worldwide ramifications. Gilles Kepel, called “France’s most famous scholar of Islam” by the New York Times, offers a clear and persuasive narrative of the long-term causes of tension while seamlessly incorporating on-the-ground observations and personal experiences from the people who lived through them.

From the Yom Kippur/Ramadan war of 1973 to the aftermath of the Arab Spring, Away from Chaos weaves together the various threads that run through Middle East politics and ties them to their implications on the global stage. With keen insight stemming from decades of experience in the region, Kepel puts these chaotic decades in perspective and illuminates their underlying dynamics. He also considers the prospects of emerging from this long-lasting turmoil and for the people of the Middle East and the world to achieve a more stable future.

Gilles Kepel has long been France’s most sophisticated scholar of radical Islam, and Away from Chaos is his personal and political summa—a remarkable synthesis of decades of passionate engagement with the Middle East. Robert F. Worth, author of A Rage for Order: The Middle East in Turmoil, from Tahrir Square to ISIS

Gilles Kepel has lived the torment of the modern Middle East as a scholar and, ultimately, as a target of the jihadists. In Away from Chaos, he narrates that tortured story and proposes a return for the steadying forces of a century ago—the European nations, a rising Russia, and the internal balancers of the Levant whose destiny is to bridge East and West. David Ignatius, The Washington Post

More than other observers of events in the Middle East and North Africa today, Kepel offers a persuasive framework in which to understand the turbulence and uncertainty facing the region—and how events in one country affect what happens elsewhere in the region and beyond. Dale F. Eickelman, coauthor of Muslim Politics

If you want to understand the contemporary Middle East, this is the place to begin. Gilles Kepel’s book is a deeply insightful, empathetic, almost elegiac text that both explains how the region ended up in its present predicament and how it may find its way out of it. O.A. Westad, Yale University

In Away from Chaos, Gilles Kepel, one of the world’s most prominent scholars of Middle Eastern politics, provides a grand narrative of this region’s history over the last four decades, explaining the rise and possible end of Islamism as a mobilizing force. Relying on his deep personal engagement with the Middle East and also with Islam in Europe, Kepel masterfully charts the region’s upheavals and their grave implications for the West. What emerges is an intimate and deeply learned portrait—the culmination of a lifetime of study and sympathetic observation. Bernard Haykel, Princeton University

Who else but Gilles Kepel could have written this seductively provocative book? Kepel has drawn on his decades of deliberation and argument in this tour d’horizon of the development of Islamist movements in the Middle East since the 1960s. Away from Chaos offers a review, equally challenging and accessible, of the modern political history of the Middle East. Lisa Anderson, author of Pursuing Truth, Exercising Power: Social Science and Public Policy in the Twenty-First Century

Introduction: A Testament for Syria
I. The Barrel and the Koran
1. The Islamization of the Political Order
2. The Onset of International Jihad: Taking on the Near Enemy (1980–1987)
3. The Second Jihadist Phase: Against the Distant Enemy (1998–2005)
4. The Third Jihadist Generation: Networks and Territories (2005–2019)
II. From Arab Spring to Jihadist Caliphate
5. The Arab Spring in Context
6. From the Fall of Despots to Societies in Turmoil
7. Sectarianism and Derailed Rebellions: The Shiite-Sunni Fault Line
III. After ISIS: Disintegration and Regrouping
8. The Fracturing of the Sunni Bloc
9. The Global Stakes in the Fight for the Levant
Conclusion: Middle Eastern Fault Lines and Global Tectonics
Acknowledgments
Chronology
Index

Gilles Kepel is chair of Middle East and Mediterranean studies at the Université Paris Sciences et Lettres and director of the Middle Eastern Mediterranean Freethinking Platform at the Università della Svizzera italiana in Lugano. He is the author of many widely acclaimed books, including, most recently translated into English, Terror in France: The Rise of Jihad in the West (2017).