Banished to the Homeland

Dominican Deportees and Their Stories of Exile 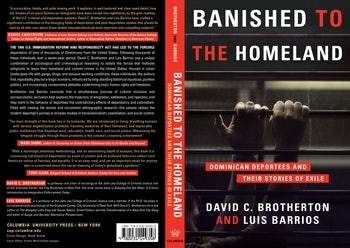 Banished to the Homeland

Dominican Deportees and Their Stories of Exile

The 1996 U.S. Immigration Reform and Responsibility Act has led to the forcible deportation of tens of thousands of Dominicans from the United States. Following thousands of these individuals over a seven-year period, David C. Brotherton and Luis Barrios use a unique combination of sociological and criminological reasoning to isolate the forces that motivate emigrants to leave their homeland and then commit crimes in the Unites States violating the very terms of their stay. Housed in urban landscapes rife with gangs, drugs, and tenuous working conditions, these individuals, the authors find, repeatedly play out a tragic scenario, influenced by long-standing historical injustices, punitive politics, and increasingly conservative attitudes undermining basic human rights and freedoms.

Brotherton and Barrios conclude that a simultaneous process of cultural inclusion and socioeconomic exclusion best explains the trajectory of emigration, settlement, and rejection, and they mark in the behavior of deportees the contradictory effects of dependency and colonialism: the seductive draw of capitalism typified by the American dream versus the material needs of immigrant life; the interests of an elite security state versus the desires of immigrant workers and families to succeed; and the ambitions of the Latino community versus the political realities of those designing crime and immigration laws, which disadvantage poor and vulnerable populations. Filled with riveting life stories and uncommon ethnographic research, this volume relates the modern deportee's journey to broader theoretical studies in transnationalism, assimilation, and social control.

A provocative, timely, and quite moving work. It explains, in well-textured and clear-eyed detail, how the dreams of so many Dominican immigrants have been turned into nightmares by the grim realities of the U.S. criminal and deportation systems. David C. Brotherton and Luis Barrios have crafted a significant contribution to the emerging fields of deportation and post-deportation studies that should be read by all who care about these widely misunderstood yet most important and compelling subjects. Daniel Kanstroom, Boston College Law School

The main strength of this book lies in its humanity. We are introduced to living, breathing humans with serious stigmatization problems, haunting memories of their homeland, and implacable public institutions that dispense work, education, health care, and social justice. Witnessing the émigrés struggle through these problems is the book's crowning achievement. Mark Hamm, author of Terrorism as Crime: From Oklahoma City to Al-Qaeda and Beyond

When it comes to the public sentiment about immigration, there has been more rhetoric than reason. This is particularly true with America's deportation policies. We devise and carry out our works as though those who area affected are not really people. Brotherton and Barrios do a superb job of putting a human face on this cold, intentionally harsh practice. With a stunningly ambitious methodology and an astonishing depth of analysis, this book is a convincing indictment of the way we use deportation as a tool of control and how it so profoundly fails to reflect core American values of fairness and equality. It is an easy read, and yet is also an important study for anyone concerned about the social meaning of today's globalized capitalism. Todd R. Clear, dean, School of Criminal Justice, Rutgers University

Banished to the Homeland promises to be a new classic in the field of ethnographic studies of marginality. By focusing on the tragedy of Dominicans criminalized and banished to an often half-forgotten 'home country,' Brotherton and Barrios have pointed the spotlight on a range of events that are becoming increasingly more common within a globalized world. In the Americas, Europe, or Asia, 'the law' of the colonizers acts like a sort of Moloch continuously feeding itself on and at the same time expelling the 'human waste' of the internal colonization processes. A veritable sociological tour de force but also a crucially topical political exposé. Dario Melossi, University of Bologna

Tracking the consequences of the US's punitive deportation policies on a group of Dominican immigrants, Brotherton and Barrios's groundbreaking study is a searing indictment of the devastation, the hypocrisy, the cruelty and the all-too-human consequences that these policies inflict on individuals and communities. Banished to the Homeland describes in unflinching detail how the American Dreamwith help from our legislature and our security apparatus--continues to devour precisely those people who need that dream the most. An important necessary book. Junot Díaz, Massachusetts Institute of Technology

The deportation of Dominican immigrants back to their land of origin predates the 1996 US Immigration Reform and Responsibility Act, but since the promulgation of that fateful legislation, the number of deportees has skyrocketed, lately reaching the rate of 300 persons per month. Similarly, the array of reasons causing these immigrants to deserve removal from American society has widened, often including minor offenses. Rarely will the lives of the individuals thus punished by US justice find closure upon returning to their ancestral country. There they frequently endure additional punishment, ostracism, and abuse at the hands of Dominican authorities. Many times they do not know the land of their birth, having lived away from it since childhood, having grown up and received their education in the United States. The country of birth in many cases becomes the land of their displacement, which gives a special poignancy to the title of this necessary book by David C. Brotherton and Luis Barrios. The Dominican Republic becomes for them a land of banishment, and their lives there continue the story of uprooting and exile that began with their original departure from the native country when they first left. After exposure to the human drama of Dominican deportees captured in this timely study by Brotherton and Barrios it will be difficult to think of them ever again as merely statistical cifers. Silvio Torres-Saillant, Syracuse University

A must read for anyone concerned with immigration, transnational ties, the criminal justice system, and human rights. Tiffany D. Joseph, Contemporary Sociology

...an excellent discussion of another group of transnational people whose history is still being charted: Dominican deportees caught over the last few decades between the United States and the Dominican Republic. Aaron Coy Moulton, Journal of Latin American Studies

David C. Brotherton is professor and chair of sociology at the John Jay College of Criminal Justice and at the Graduate Center, the City University of New York. His most recent book is Keeping Out the Other: A Critical Introduction to Immigration Enforcement Today.

Luis Barrios is a professor at the John Jay College of Criminal Justice and a member of the Ph.D. faculties in social/personality psychology at the Graduate Center, City University of New York. With David C. Brotherton, he is the author of The Almighty Latin King and Queen Nation: Street Politics and the Transformation of a New York City Gang and editor of Gangs and Society: Alternative Perspectives.