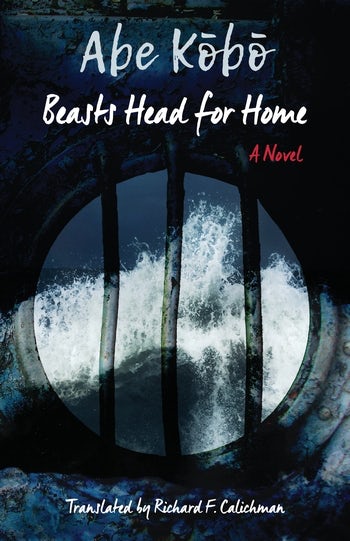 In the aftermath of World War II, Kuki Kyūzō, a Japanese youth raised in the puppet state of Manchuria, struggles to return home to Japan. What follows is a wild journey involving drugs, smuggling, chases, and capture. Kyūzō finally makes his way to the waters off Japan but finds himself unable to disembark. His nation remains inaccessible to him, and now he questions its very existence. Beasts Head for Home is an acute novel of identity, belonging, and the vagaries of human behavior from an exceptional modern Japanese author.

With its historical setting and named characters, Beasts Head for Home diverges from the surreal landscape of Abe's best-known work, The Woman in the Dunes, but alienation is at the Kafkaesque heart of both novels. Though Kyuzo somehow manages to complete his physical journey, he remains an exile, unable even to define the home he seeks. . . . The howling misery of his displacement circa 1947 resonates powerfully with the headlines of 2017: a grim story of the past for our grim present. Janice P. Nimura, The New York Times Book Review

Beasts Head for Home is as riveting and as unforgiving as the frigid Civil War wilderness in which it is set. Peter Gordon, Asian Review of Books

This early work of acclaimed Japanese writer Abe is finally available in English, and Calichman’s adroit translation also provides an essential context-establishing introduction. Abe’s novel is testimony to survival despite gruesome odds as well as a chilling warning about the cost to humanity of such struggles. Booklist

[Beasts Head for Home] is a necessary part of Abe's important body of work, a book of vivid scenes and strange characters, a book that feels like the hollow terror after a nightmare passes. Corey Mesler, Memphis Flyer

Abe Kōbō is one of the most respected postwar Japanese fiction writers and internationally recognized for the unique style, philosophical depth, and experimental quality of his fiction. Although Beasts Head for Home is not one of Abe’s most well-known works, readers will be eager to see how he wrote about an important historical moment from an essentially realist perspective. An excellent translation of a novel in need of an English-language version. Travis Workman, author of Imperial Genus: The Formation and Limits of the Human in Modern Korea and Japan

The earliest work by one of Japan’s foremost writers to appear in English, Beasts Head for Home tells the story of a young Japanese man who undertakes a harrowing journey in an attempt to reach Japan after the collapse of the Japanese Empire. The story is particularly affecting to read in this historical moment with so much forced migration all over the world. Calichman’s translation is flawless. J. Keith Vincent, translator of Devils in Daylight by Junichiro Tanizaki

Calichman’s superb translation of Abe’s semiautobiographical novel brings us a Kafkaesque world of displacement where settlers of Manchuria undergo the loss of home, identity, and belonging after the collapse of the Japanese empire. Beasts Head for Home is a haunting and gripping story and an indispensable read for anyone interested in postcolonial studies, settler colonial studies, and the history of empire. Katsuya Hirano, author of The Politics of Dialogic Imagination: Power and Popular Culture in Early Modern Japan

With subtle echoes of a samurai classic, Abe’s autobiographical novel is a memorable portrait of statelessness, exile, and wandering. Kirkus Reviews

This novel is an excellent entry point into Abe’s writing, with much of his signature tone and style. He is a master of controlling the reader’s emotional investment while crafting an increasingly suffocating atmosphere of dread, resulting in a devastating reading experience. Publishers Weekly (starred review)

In a time when the world is increasingly faced with an obsession with borders and anxieties regarding what is called the "refugee crisis," this timely new translation of Kobo Abe's novel provides a necessary coming to terms with the experience of the ravages of war on the displaced. . . . Abe exposes the very fluidity with which our sense of belongingness, even ownership, must continually be tested and reckoned with. Lawrence Lacambra Ypil, Cha: An Asian Literary Journal

Abe Kobo (1924–1993) was one of Japan's greatest postwar writers, widely recognized for his imaginative fiction and plays of the absurd.

Richard F. Calichman is professor of Japanese studies at the City College of New York, CUNY. He is also the translator and editor of The Frontier Within: Essays by Abe Kobo (Columbia, 2013).