How Ordinary People Respond to the Media Spotlight 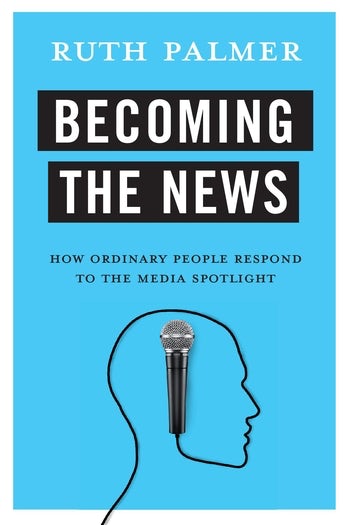 How Ordinary People Respond to the Media Spotlight

What does it feel like to be featured, quoted, or just named in a news story? A refugee family, the survivor of a shooting, a primary voter in Iowa—the views and experiences of ordinary people are an important component of journalism. While much has been written about how journalists work and gather stories, what do we discover about the practice of journalism and attitudes about the media by focusing on the experiences of the subjects themselves? In Becoming the News, Ruth Palmer argues that understanding the motivations and experiences of those who have been featured in news stories—voluntarily or not—sheds new light on the practice of journalism and the importance many continue to place on the role of the mainstream media.

Based on dozens of interviews with news subjects, Becoming the News studies how ordinary people make sense of their experience as media subjects. Palmer charts the arc of the experience of “making” the news, from the events that brought an ordinary person to journalists’ attention through the decision to cooperate with reporters, interactions with journalists, and reactions to the news coverage and its aftermath. She explores what motivates someone to talk to the press; whether they consider the potential risks; the power dynamics between a journalist and their subject; their expectations about the motivations of journalists; and the influence of social media on their decisions and reception. Pointing to the ways traditional news organizations both continue to hold on to and are losing their authority, Becoming the News has important implications for how we think about the production and consumption of news at a time when Americans distrust the news media more than ever.

What is it like for ordinary people to be in the news? This is a critically important question for understanding the practice of journalism and how it is perceived by the public. Becoming the News tackles it in a most interesting, engaging, and revelatory manner, showing how ordinary news subjects frequently experience journalists as an overwhelming and unaccountable power, and not as someone on their side. Anyone interested in understanding the crisis of trust facing journalism today should read this book to hear the public’s side of the story. Rasmus Nielsen, Director of Research, Reuters Institute for the Study of Journalism, University of Oxford

Becoming the News examines the seemingly mundane experience of having been mentioned in the news—an important social phenomenon that scholars have ignored and one that changes how huge numbers of Americans think not only about the news media but also about themselves. Palmer weaves a compelling tapestry of classic social theory, modern scholarship, and outstanding interviews. Built on thoughtful and sensitive research and brimming with insight, Becoming the News is a breakthrough contribution to the fields of sociology and journalism studies. David Pritchard, University of Wisconsin, Milwaukee

From Kurt and Gladys Lang to Todd Gitlin, media scholars have probed the disjuncture between experiencing a media event and the journalistic coverage of it. Now, in our era of fake news and partisan distrust, Ruth Palmer analyzes how ordinary people feel when they become the subjects of news stories. This timely and fascinating book marks a major step forward for the field of communication research. C.W. Anderson, University of Leeds

Preface
Acknowledgments
1. Victims of the Press?
2. What’s in It for Them? Weighing the Pros and Cons of Becoming a News Subject
3. The Interview Stage Part 1: Encountering Journalists
4. The Interview Stage Part 2: From Interaction to Story
5. Truth (Perceptions) and Consequences: How News Subjects Judge Accuracy and Error
6. That’s Me! . . . But It’s Not Me: Aesthetic, Emotional, and Existential Effects of Confronting Our News Selves
7. Celebration, Condemnation, Reputation: Audience Feedback as an Indicator of Status and Stigma
8. Making the News in a Digital World
9. Lessons for Subjects and Journalists
Note on Method
Notes
Bibliography
Index

Ruth Palmer is an assistant professor of communications at IE University in Madrid and Segovia. Her work has been published in Journalism, Journalism Studies, and Literary Journalism Studies. She was also a writer and editor for the Knight Case Studies Initiative at the Columbia University Graduate School of Journalism.