Being Human in a Buddhist World

An Intellectual History of Medicine in Early Modern Tibet 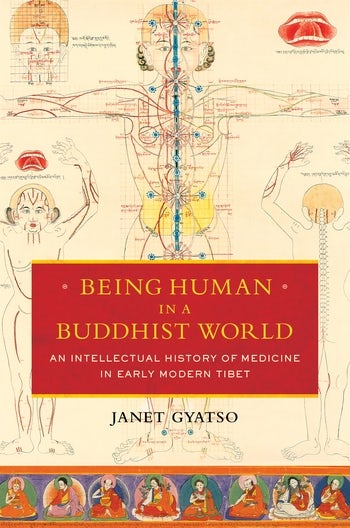 Being Human in a Buddhist World

An Intellectual History of Medicine in Early Modern Tibet

Critically exploring medical thought in a cultural milieu with no discernible influence from the European Enlightenment, Being Human in a Buddhist World reveals an otherwise unnoticed intersection of early modern sensibilities and religious values in traditional Tibetan medicine. It further studies the adaptation of Buddhist concepts and values to medical concerns and suggests important dimensions of Buddhism's role in the development of Asian and global civilization.

Through its unique focus and sophisticated reading of source materials, Being Human adds a crucial chapter in the larger historiography of science and religion. The book opens with the bold achievements in Tibetan medical illustration, commentary, and institution building during the period of the Fifth Dalai Lama and his regent, Desi Sangye Gyatso, then looks back to the work of earlier thinkers, tracing a strategically astute dialectic between scriptural and empirical authority on questions of history and the nature of human anatomy. It follows key differences between medicine and Buddhism in attitudes toward gender and sex and the moral character of the physician, who had to serve both the patient's and the practitioner's well-being. Being Human in a Buddhist World ultimately finds that Tibetan medical scholars absorbed ethical and epistemological categories from Buddhism yet shied away from ideal systems and absolutes, instead embracing the imperfectability of the human condition.

An amazing book and a stellar contribution to Columbia University Press's growing catalog of Tibetan and Tibetan Buddhist studies, for it will be the key book on medicine and religion in Tibet for this generation. Like Janet Gyatso's book on autobiography, her new book on medicine will simply be field defining. Little of this literature has received attention to date, and in fact much of it has only been available to a contemporary international scholarly audience for a decade or so. Kurtis R. Schaeffer, University of Virginia

Janet Gyatso's long-awaited Being Human in a Buddhist World is the most important study of Tibetan medicine in the English language, surpassing previous scholarship in the scope of its history, the extent of its research, and the depth of its insights. Yet it is also more than that. It is the rare work that causes us to rethink the foundations of our field, leaving readers with both answers and questions about what is encompassed by terms like 'Tibetan Buddhism' and 'medical science.' Donald Lopez, University of Michigan

This book is a fascinating, lucid, and profound exploration of the history in Tibet of the mentality and practices, both empirical and discursive, of probative medicine within the context of Buddhist civilization, a concept introduced and used as a more broad category than that of a 'Buddhism' concerned primarily with ideals of human perfection and supernatural realms. Moving deftly between fine-grained analysis of textual and visual materials from the seventh to seventeenth centuries and an open-ended discussion of large-scale historical and cultural issues, the book makes a significant contribution not only to Tibetan and Buddhist studies but also to current debates on the historiography and philosophy of the interactions and conflicts between religion and science. Steven Collins, University of Chicago

Janet Gyatso's book is an extraordinarily sophisticated presentation of the history of Tibetan Buddhist medical practice from the inside out—an account that is deeply grounded in Tibetan language sources while never losing sight of key analytical, historical, and methodological questions pertinent to recent debates in the history of medicine and Buddhist studies, not to mention wider studies in the history of culture and literature in South Asia and beyond. This book will be a landmark in the study of South Asian medical traditions. What distinguishes it from other studies is its complexity of vision. It deftly traces the surprising entanglements of Buddhist doctrine, state patronage, and social power with both scholastic medical traditions and medical practitioners on the ground to give us a historical picture that is compellingly nuanced and refreshingly open—clearing the path for future research. Daud Ali, University of Pennsylvania

A fascinating intellectual history by a mature scholar at the top of her game. Choice

Written in a brilliant style, with engaging language.... This exceptional work is an inspiring and valuable contribution to a broad range of medical discourses reaching well beyond the world of Tibetan medicine. Isis

[Gyatso's] breadth of erudition is matched by the clarity and sophistication with which she frames and explicates her subject matter. Bulletin of the History of Medicine

This is a major contribution to the field, and deserves to be widely read. Social History of Medicine

Lucid and eloquent.... [Being Human in a Buddhist World] is a major contribution to the broader issues of science-religion themes in Asian medicine, and will clearly be outstanding among the works on the history of Tibetan medicine for a long time to come. Barbara Gerke, Himalaya: The Journal of the Association for Nepal and Himalayan Studies

[Being Human in a Buddhist World] greatly increases our understanding of Tibetan medical history, and could complement well readings in a graduate course on the history of science or medicine in Asia. Ryan John Jones, Religious Studies Review

As an engaging account about how medicine as a Tibetan knowledge tradition advanced in a pre-modern environment, Gyatso’s book will be, no doubt, of great interest to Tibetologists, intellectual historians, and historians of science alike. Reading Religion

List of Illustrations
Acknowledgments
A Technical Note
Abbreviations
Introduction
Part I: In the Capital
1. Reading Paintings, Painting the Medical, Medicalizing the State
2. Anatomy of an Attitude: Medicine Comes of Age
Part II: Bones of Contention
3. The Word of the Buddha
4. The Evidence of the Body: Medical Channels. Tantric Knowing
5. Tangled Up in System: The Heart, in the Text and in the Hand
Coda: Influence, Rhetoric, and Riding Two Horses at Once
Part III: Roots of the Profession
6. Women and Gender
7. The Ethics of Being Human: The Doctor's Formation in a Material Realm
Conclusion: Ways and Means for Medicine
Notes
Bibliographies
Index

Janet Gyatso is Hershey Professor of Buddhist Studies at Harvard University, where she serves on the faculty of the Divinity School, in the Study of Religion, East Asian Languages and Civilizations, and Inner Asian and Altaic Studies. Her writing has centered on Tibetan Buddhism and its cultural and intellectual history from the perspective of large issues in the humanities about human experience and its literary presentation. She is the author of Apparitions of the Self: The Secret Autobiographies of a Tibetan Visionary, as well as several edited volumes.