Nationalism and the Economics of Global Movement 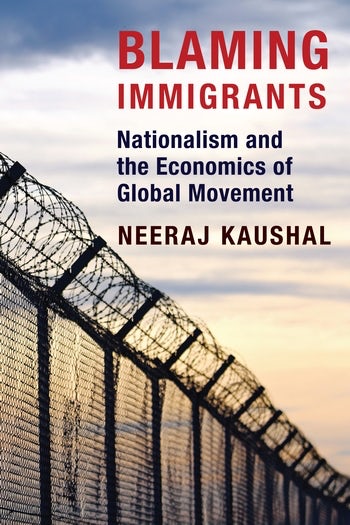 Nationalism and the Economics of Global Movement

Immigration is shaking up electoral politics around the world. Anti-immigration and ultranationalistic politics are rising in Europe, the United States, and countries across Asia and Africa. What is causing this nativist fervor? Are immigrants the cause or merely a common scapegoat?

In Blaming Immigrants, economist Neeraj Kaushal investigates the rising anxiety in host countries and tests common complaints against immigration. Do immigrants replace host country workers or create new jobs? Are they a net gain or a net drag on host countries? She finds that immigration, on balance, is beneficial to host countries. It is neither the volume nor pace of immigration but the willingness of nations to accept, absorb, and manage new flows of immigration that is fueling this disaffection. Kaushal delves into the demographics of immigrants worldwide, the economic tides that carry them, and the policies that shape where they make their new homes. She demystifies common misconceptions about immigration, showing that today’s global mobility is historically typical; that most immigration occurs through legal frameworks; that the U.S. system, far from being broken, works quite well most of the time and its features are replicated by many countries; and that proposed anti-immigrant measures are likely to cause suffering without deterring potential migrants. Featuring accessible and in-depth analysis of the economics of immigration in worldwide perspective, Blaming Immigrants is an informative and timely introduction to a critical global issue.

This is an exciting and innovative book containing some provocative, offbeat ideas. In contrast to most other works on immigration, it deals with international migration and the reactions to it all over the world, not just in the United States or Europe. It emphasizes the complexity of the issues and avoids oversimplifying the problems in order to offer a ‘solution.’ Kaushal has an important, well-argued message, supported by convincing evidence. She recognizes that immigration hurts some groups of host-country natives who should be compensated, but provides evidence that it benefits the host societies overall. Cordelia Reimers, Hunter College

In this comprehensive and carefully researched book, Kaushal provides a fresh and convincing analysis of the underlying reasons behind the antiimmigrant movement facing the world in recent years. This book is a must for anyone interested in understanding both the myths and realities surrounding immigration. Francisco L. Rivera-Batiz, author of International and Interregional Migration: Theory and Evidence

What could be more valuable at this time than Neeraj Kaushal’s learned, beautifully written examination of the validity of the populist critique of immigration? Blaming Immigrants provides deep, critical insights into migration and immigration systems globally and in the U.S.: their histories, successes, failures, and prospects for reform. This is a nuanced, brave, and incredibly helpful book. Michael Fix, senior fellow and former president, Migration Policy Institute

In her well-reasoned, illuminating book, Neeraj Kaushal offers policy makers at all levels of government and the general public alike a timely opportunity to examine the dimensions of immigration concerns that have become highly charged, politically divisive issues in a growing number of nations in the global community. Her richly documented discussion pierces through the oftentimes emotion-laden, dismissive regard of immigrants and their impact on host communities and argues that we must view critically the underlying social, economic, and other forces that contribute towards a skewing in the direction of hostility to those “others” who ultimately may be essential to ensuring our vitality and competitiveness in the future. Jeanette C. Takamura, former assistant secretary for aging, U.S. Department of Health and Human Services

A new book on the subject, Blaming Immigrants, by University of Columbia professor, Neeraj Kaushal, says it all. It pulls together most of the research so far done. Jonathan Power, NY Journal of Books

The great merit of Kaushal’s book is that it makes the case for policies based on facts and evidence, and shows the need for political leaders to explain different ‘costs’ and ‘benefits’ in ways which are considered rather than indulging unjustified antipathies and anxieties about ‘others’. Process North

Neeraj Kaushal is professor of social policy and chair of the doctoral program at the Columbia University School of Social Work. She is also a research associate at the National Bureau of Economic Research and a research fellow at the Institute for the Study of Labor in Bonn, Germany.