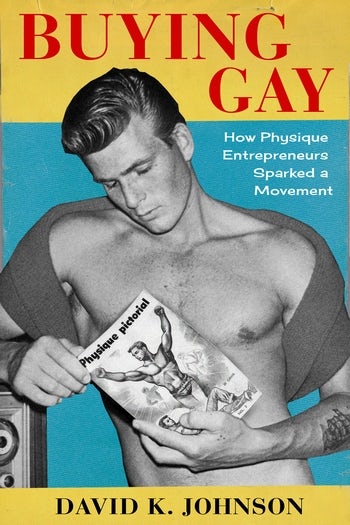 In 1951, a new type of publication appeared on newsstands—the physique magazine produced by and for gay men. For many men growing up in the 1950s and 1960s, these magazines and their images and illustrations of nearly naked men, as well as articles, letters from readers, and advertisements, served as an initiation into gay culture. The publishers behind them were part of a wider world of “physique entrepreneurs”: men as well as women who ran photography studios, mail-order catalogs, pen-pal services, book clubs, and niche advertising for gay audiences. Such businesses have often been seen as peripheral to the gay political movement. In this book, David K. Johnson shows how gay commerce was not a byproduct but rather an important catalyst for the gay rights movement.

Offering a vivid look into the lives of physique entrepreneurs and their customers, and presenting a wealth of illustrations, Buying Gay explores the connections—and tensions—between the market and the movement. With circulation rates many times higher than the openly political “homophile” magazines, physique magazines were the largest gay media outlets of their time. This network of producers and consumers helped foster a gay community and upend censorship laws, paving the way for open expression. Physique entrepreneurs were at the center of legal struggles, especially against the U.S. Post Office, including the court victory that allowed full-frontal male nudity and open homoeroticism. Buying Gay reconceives the history of the gay rights movement and shows how consumer culture helped create community and a site for resistance.

This deeply researched book expands our understanding of pre-Stonewall gay male activism by describing a bold group of physique photographers, magazine publishers, and booksellers who were more militant than the Mattachine Society and built a far larger constituency through their explicit portrayal and defense of homoerotic desire. A revelatory and compelling history. George Chauncey, author of Gay New York

What do 1950s muscle magazines, gay booksellers, and pen-pal networks have to do with the LGBTQ movement? A great deal more than you might think. In this compelling book, David Johnson unearths stories of shrewd businessmen and hungry consumers who, through asserting their right to sell and buy and read what the law tried to ban, challenged repression, fostered gay community, and helped to build a movement. Leila J. Rupp, author of A Desired Past: A Short History of Same-Sex Love in America

Johnson’s convincing fleshy history challenges conventional wisdom, arguing that what we have called the ‘homophile era’ (defined by 1950s and 1960s gay rights social movements) was actually ‘the physique era’—when the market of homoerotic fitness magazines and mail-order commerce produced a much larger imagined community and had arguably more significant legal impact. Lucas Hilderbrand, author of Paris is Burning: A Queer Film Classic

David K. Johnson’s Buying Gay is a groundbreaking work that reshapes how we think about queer history and its political movements. Johnson explores the barely underground world of pre-Stonewall publishing that shaped LGBT life, politics, and promotion of a gay identity. Johnson’s lucid writing and enthralling story startlingly remaps and complicates movement history, suggesting that an army of consumers cannot lose. Michael Bronski, author of A Queer History of the United States

Offering a deeply researched, panoramic view of a world that had not yet received a serious scholarly treatment, Johnson persuasively shows that gay consumer culture developed earlier than we imagined. A landmark intervention in LGBTQ history. Timothy Stewart-Winter, author of Queer Clout: Chicago and the Rise of Gay Politics

Filling unfortunate gaps in the historiographies of business, capitalism, and consumption, Buying Gay is an exciting, innovative, original, and groundbreaking new study of gay consumer culture in the 1950s and 1960s. Marc Stein, author of The Stonewall Riots: A Documentary History

In this intelligent work, historian Johnson . . . makes a compelling case that, in contrast to the academic tendency to dismiss physique magazines as mere artifacts of closeted life, physique entrepreneurs went on to found other businesses and ultimately created ‘a gay market.’ . . . Johnson draws on archival evidence and original interviews in prose that remains accessible even as it demonstrates his scholarly chops. This excellent history brings to light a little-known subject with a well-supported, unusual argument. Publishers Weekly (starred review)

Through a finely tuned narrative, Johnson traces the arc of physique magazines, offering an inside look at the stories and personalities of the courageous publishers of gay magazines and books. . . . It is clear from Johnson’s excellent study that physique magazines had more than historical significance; they were central to gay culture in the 1960s, representing a way for gay men to celebrate their own sexuality and find commonality with others. Foreword Reviews

An accessible, detailed and riveting journey into the pioneering early gay physique zine industry. . . . David K Johnson reveals how the trade — more than just producing iconic, epic images — was an important catalyst for the gay rights movement. This is an indispensable and fascinating addition to the library of anyone interested in gay culture. Uli Lenart, Attitude

Johnson shows how physique entrepreneurs consolidated the power of the gay community in the United States, allowing them to resist the persecution from the U.S. Postal Service amidst the anti-communism of the Cold War. Johnny Fulfer and Catherine Cueto, The Economic Historian

Buying Gay challenges prevailing gay historiography, which has long been dominated by leftist and even socialist 'queer' analyses averse to capitalism and American society itself. . . . Even taking Stonewall into consideration, gay activists have achieved their greatest victories not in trying to overturn society, but rather by broadening it. And as Buying Gay shows, they were most effective when using the tools of bourgeois capitalism. James Kirchick, Times Literary Supplement

Buying Gay is a thorough, and extremely entertaining read that delights in several ways, and especially in terms of David K. Johnson’s analysis of the tropes of physique magazines. Hyperallergic

In this richly documented, groundbreaking volume, Johnson retrieves the genre of physique magazines as an unrecognized source of historical information on the gradual development of a homosexual community. Choice

Bodies politic and visual are at the heart of David K. Johnson’s well-written and extensively researched book. . . . Johnson documents the birth and decline of the physique industries with a deep dive into original and secondary sources, crafting a creative and challenging rethinking of the prologue to the explosion of the LGBTQ movements. Marc J. Stern, Business History Review

David Johnson's Buying Gay: How Physique Entrepreneurs Sparked a Movement is an important contribution to several fields: American cultural history, queer history and histories of capitalism and consumerism to name just a few. Buying Gay breaks down binaries between capitalist and entrepreneur on the one hand and queer subject and activist on the other, arguing that commercial activity by gay entrepreneurs contributed to community building and progressive change. Justin Bengry, Advertising & Society Quarterly

Buying Gay is meticulously researched, well written, and, like the best scholarship, demands that we rethink ideas we have taken for granted in the light of compelling new data. Katherine Sender, Advertising & Society Quarterly

Johnson successfully rewrites the physique era into gay political history in this well‐argued and engaging work. Emma M. Broder, Journal of the History of the Behavioral Sciences

What is most useful and original in Johnson’s work is that he offers a new genealogy of the LGBTQ movement in the United States. The Point

David K. Johnson is associate professor of history at the University of South Florida. He is the author of The Lavender Scare: The Cold War Persecution of Gays and Lesbians in the Federal Government (2004), which was made into an award-winning documentary.