Jewishness in the Caribbean Literary Imagination 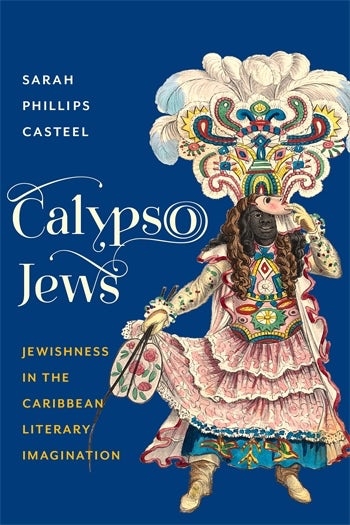 Jewishness in the Caribbean Literary Imagination

In original and insightful ways, Caribbean writers have turned to Jewish experiences of exodus and reinvention, from the Sephardim expelled from Iberia in the 1490s to the "Calypso Jews" who fled Europe for Trinidad in the 1930s. Examining these historical migrations through the lens of postwar Caribbean fiction and poetry, Sarah Phillips Casteel presents the first major study of representations of Jewishness in Caribbean literature. Bridging the gap between postcolonial and Jewish studies, Calypso Jews enriches cross-cultural investigations of Caribbean creolization.

Caribbean writers invoke both the 1492 expulsion and the Holocaust as part of their literary archaeology of slavery and its legacies. Despite the unequal and sometimes fraught relations between Blacks and Jews in the Caribbean before and after emancipation, Black-Jewish literary encounters reflect sympathy and identification more than antagonism and competition. Providing an alternative to U.S.-based critical narratives of Black-Jewish relations, Casteel reads Derek Walcott, Maryse Condé, Michelle Cliff, Jamaica Kincaid, Caryl Phillips, David Dabydeen, and Paul Gilroy, among others, to reveal a distinctive interdiasporic literature.

An engaging and rather unusual study of diaspora Jewry in the West Indies.... [that shines a] bright, exalting light... on the Caribbean and its many different peoples. Ian Thomson, Times Literary Supplement

Throughout Calypso Jews, Casteel makes a case for how hidden Sephardism has captured the imagination of culturally diverse authors post-slavery. The fullness and novelty of her research opens a fascinating dialogue on the intersections of black and Jewish relationships as revealed through Caribbean literature. Sharon Elswit, Jewish Book Council

A path-breaking study.... By bringing a fresh approach to a much-neglected area of scholarship, Casteel has made a major contribution to our understanding of the Caribbean writer's commitment to bearing witness to the traumas of modernity. Patrick Taylor, H-Caribbean

Casteel's richly informative study...shows us that the peoples of the world do not merely trade and compete with, love and harm one another; they also watch each other in history, become compelled by one another’s stories. ALH Online Review

This is a fantastic book that makes a significant contribution to the fields of both Jewish American and Caribbean studies. . . . It also provides an intriguing model of what a truly transnational approach may look like. Laura Arnold Leibman, American Jewish History

This treasure will surely become a classic of Caribbean literary criticism that scholars would be wise to emulate. I am grateful for this groundbreaking exegesis of the Jewish Caribbean / diaspora literary canon. Dr. Mary H. Auerbach-Rykov, The Caribbean Writer

Sarah Phillips Casteel is associate professor of English at Carleton University, where she holds a cross-appointment with the Institute of African Studies. She is the author of Second Arrivals: Landscape and Belonging in Contemporary Writing of the Americas and coeditor, with Winfried Siemerling, of Canada and Its Americas: Transnational Navigations.