Can the Subaltern Speak?

Reflections on the History of an Idea 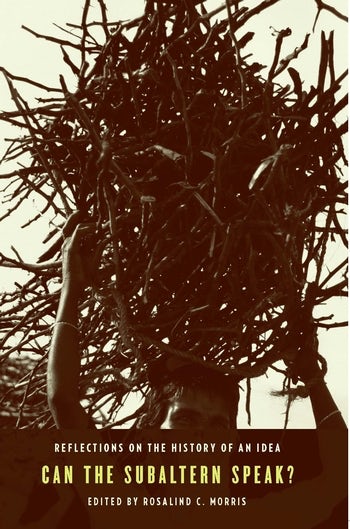 Can the Subaltern Speak?

Reflections on the History of an Idea

Gayatri Chakravorty Spivak's original essay "Can the Subaltern Speak?" transformed the analysis of colonialism through an eloquent and uncompromising argument that affirmed the contemporary relevance of Marxism while using deconstructionist methods to explore the international division of labor and capitalism's "worlding" of the world. Spivak's essay hones in on the historical and ideological factors that obstruct the possibility of being heard for those who inhabit the periphery. It is a probing interrogation of what it means to have political subjectivity, to be able to access the state, and to suffer the burden of difference in a capitalist system that promises equality yet withholds it at every turn.

Since its publication, "Can the Subaltern Speak?" has been cited, invoked, imitated, and critiqued. In these phenomenal essays, eight scholars take stock of the effects and response to Spivak's work. They begin by contextualizing the piece within the development of subaltern and postcolonial studies and the quest for human rights. Then, through the lens of Spivak's essay, they rethink historical problems of subalternity, voicing, and death. A final section situates "Can the Subaltern Speak?" within contemporary issues, particularly new international divisions of labor and the politics of silence among indigenous women of Guatemala and Mexico. In an afterword, Spivak herself considers her essay's past interpretations and future incarnations and the questions and histories that remain secreted in the original and revised versions of "Can the Subaltern Speak?"both of which are reprinted in this book.
Introduction, by Rosalind C. Morris
Part 1 Text
"Can the Subaltern Speak?" revised edition, from the "History" chapter of Critique of Postcolonial Reason, by Gayatri Chakravorty Spivak
Part 2 Contexts and Trajectories
Reflections on "Can the Subaltern Speak?" Subaltern Studies after Spivak, by Partha Chatterjee Postcolonial Studies: Now That's History, by Ritu Birla
The Ethnical Affirmation of Human Rights: Gayatri Spivak's Intervention, by Drucilla Cornell Part 3 Speaking of (Not) Hearing: Death and the Subaltern
Death and the Subaltern, by Rajeswawri Sunder Rajan
Between Speaking and Dying: Some Imperatives in the Emergence of the Subaltern in the Context of U.S. Slavery, by Abdul JanMohamed
Subalterns at War, by Michele Barrett
Part 4 Contemporaneities and Possible Futures: (Not) Speaking and Hearing
Biopower and the New International Division of Reproductive Labor, by Pheng Cheah
Moving from Subalternity: Indigenous Women in Guatemala and Mexico, by Jean Franco
Part 5 In Response
In Response: Looking Back, Looking Forward, by Gayatri Chakravorty Spivak
Appendix Can the Subaltern Speak? Bibliography
Contributors
Index

Rosalind C. Morris is professor of anthropology and former associate director of the Institute for Comparative Literature and Society at Columbia University. A scholar of both mainland Southeast Asia and South Africa, she has published widely on topics concerning the politics of representation, the relationship between violence and value, gender and sexuality, the mass media, and the changing forms of modernity in the global south. Her most recent book is Photographies East: The Camera and Its Histories in East and Southeast Asia. She is also the author of In the Place of Origins: Modernity and Its Mediums in Northern Thailand and New Worlds from Fragments: Film, Ethnography, and the Representation of Northwest Coast Cultures.