Canada In The World 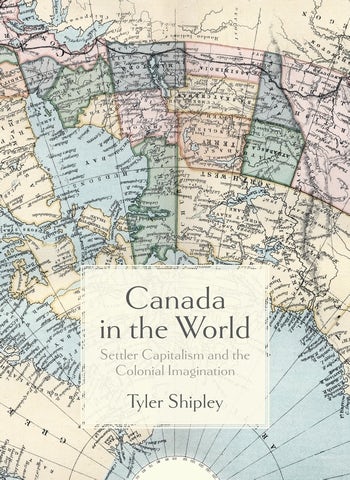 Canada In The World

An accessible and empirically rich introduction to Canada’s engagements in the world since confederation, this introductory textbook charts a unique path by locating Canada’s colonial foundations at the heart of the analysis. Canada in the World begins by arguing that the colonial relations with Indigenous peoples represent the first example of foreign policy, and demonstrates how these relations became a foundational and existential element of the new state. Colonialism—the project to establish settler capitalism in North America and the ideological assumption that Europeans were more advanced and thus deserved to conquer the Indigenous people—says Shipley, lives at the very heart of Canada.
Through a close examination of Canadian foreign policy, from crushing an Indigenous rebellion in El Salvador, “peacekeeping” missions in the Congo and Somalia, and Cold War interventions in Vietnam and Indonesia, to Canadian participation in the War on Terror, Canada in the World finds that this colonial heart has dictated Canada’s actions in the world since the beginning.
Highlighting the continuities across more than 150 years of history, Shipley demonstrates that Canadian policy and behaviour in the world is deep-rooted, and argues that changing this requires rethinking the fundamental nature of Canada itself.
Introduction: "History Will Be Re-Written" • Part I: Conquest and Colonialism: Canada's First Foreign Policy • Colonial Encounters • Conquest and Genocide • From the Potlatch to the Residential Schools • Part II: Canada and the Catastrophe Years • The Great War and the so-called ‘Birth of a Nation’ • Flirting with Fascism: Canada Between the Wars • Hard Questions Concerning Canada’s ‘Good War’ • Part III: Peacekeeping the Cold War • Scorching the Earth: When Peace Looks Like War • A Part of Our Heritage: Canada’s Commitment to Colonialism • Canada and the End of History • Part IV: The New Canadian Imperialism • The Dark Heart of Peacekeeping • “What the Afghans Need is Colonizing:” Canada’s War on Terror • Contemporary Canada and the Rise of Fascism • Conclusion: "Canada is Back”

Tyler A. Shipley is a Professor of Society, Culture and Commerce in the Department of Liberal Studies at Humber College Institute of Technology and Advanced Learning. He holds a PhD in Political Science from York University.