The Psychic Cost of Free Markets 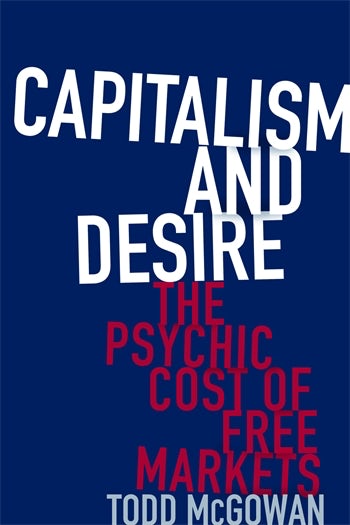 The Psychic Cost of Free Markets

Despite creating vast inequalities and propping up reactionary world regimes, capitalism has many passionate defenders—but not because of what it withholds from some and gives to others. Capitalism dominates, Todd McGowan argues, because it mimics the structure of our desire while hiding the trauma that the system inflicts upon it. People from all backgrounds enjoy what capitalism provides, but at the same time are told more and better is yet to come. Capitalism traps us through an incomplete satisfaction that compels us after the new, the better, and the more.

Capitalism's parasitic relationship to our desires gives it the illusion of corresponding to our natural impulses, which is how capitalism's defenders characterize it. By understanding this psychic strategy, McGowan hopes to divest us of our addiction to capitalist enrichment and help us rediscover enjoyment as we actually experienced it. By locating it in the present, McGowan frees us from our attachment to a better future and the belief that capitalism is an essential outgrowth of human nature. From this perspective, our economic, social, and political worlds open up to real political change. Eloquent and enlivened by examples from film, television, consumer culture, and everyday life, Capitalism and Desire brings a new, psychoanalytically grounded approach to political and social theory.

Capitalism and Desire turns around the predominant leftist whining about the devastating psychic consequences of global capitalism, about how it undermines elementary structures of psychic stability which enable individuals to lead a meaningful life. The focus of Todd McGowan's effort is, rather, the enigma of the success of capitalist ideology: how was it possible for such a destabilizing life practice to fully capture the libidinal lives of billions, how was it possible that continuous crises and states of exception only strengthened its hold? In short, how is it possible that capitalism again and again imposes itself as the cure for the crisis it brings about? In answering these difficult questions, McGowan has produced a classic. Slavoj Zizek

McGowan's argument is positively brilliant—almost every page brings a startling insight and every chapter compels an exciting reorientation of thought. Because of its paradigm-shifting originality, Capitalism and Desire places McGowan among the most prominent critical thinkers of his generation and competes admirably even with the very best work of the generation before him. Mari Ruti, author of The Call of Character: Living a Life Worth Living

With Capitalism and Desire, McGowan provides an admirably accessible and intellectually sophisticated analysis of the real connections between capitalism and psychoanalysis. This is a wonderful book demonstrating immense intellectual vitality—it is simply impossible to ignore. Fabio Vighi, author of Critical Theory and the Crisis of Contemporary Capitalism

How many syntheses of Marx and Freud have been forged in an attempt to ground a critique of capitalism—only in the end to fail? After tallying their individual failures, this smart book goes on to confront their underlying problem: a botched reading of Freud. Relying on Lacan's radical re-excavation of Freud, McGowan offers brand-new ideas about the subject's ensnarement in the "freedoms" of capitalism and the possibilities of resistance to them. Joan Copjec, author of Read My Desire: Lacan Against the Historicists

The immense satisfaction of McGowan's latest and most ambitious book is achieved, appropriately enough, by putting capitalism to the test of a suitably profound (and paradoxical) conception of satisfaction. Astonishingly far-ranging in its references yet written in perfectly limpid prose, Capitalism and Desire sets a new high-water mark in contemporary social and political philosophy. A dazzling work of theory. Richard Boothby, author of Sex on the Couch: What Freud Still Has To Teach Us About Sex and Gender

McGowan's book is a reader-friendly and therapeutic dissection of capitalism's success. His examples are readily comprehensible and he avoids heavy academic language. Scottish Left Review

Although there has been, in some circles, a dismissal of Lacan and psychoanalysis more generally, McGowan’s impressive application of the seemingly intractable Lacanian subject to the conditions of late capitalism enables those who might otherwise be disinterested in psychoanalysis to see its unique and important contribution. Symposium

Acknowledgments
Introduction: After Injustice and Repression
1. The Subject of Desire and the Subject of Capitalism
2. The Psychic Constitution of Private Space
3. Shielding Our Eyes from the Gaze
4. The Persistence of Sacrifice After Its Obsolescence
5. A God We Can Believe In
6. A More Tolerable Infinity
7. The Ends of Capitalism
8. Exchanging Love for Romance
9. Abundance and Scarcity
10. The Market's Fetishistic Sublime
Conclusion: Enjoy, Don't Accumulate
Notes
Index

Winner, 2017 American Board and Academy of Psychoanalysis Book Prize

Todd McGowan is associate professor of film studies at the University of Vermont. He is the author of Enjoying What We Don't Have: The Political Project of Psychoanalysis (2013) and The Impossible David Lynch (Columbia, 2007), among other books.