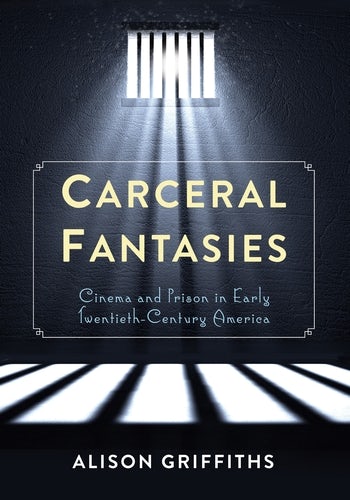 A groundbreaking contribution to the study of nontheatrical film exhibition, Carceral Fantasies tells the little-known story of how cinema found a home in the U.S. penitentiary system and how the prison emerged as a setting and narrative trope in modern cinema. Focusing on films shown in prisons before 1935, Alison Griffiths explores the unique experience of viewing cinema while incarcerated and the complex cultural roots of cinematic renderings of prison life.

Griffiths considers a diverse mix of cinematic genres, from early actualities and reenactments of notorious executions to reformist exposés of the 1920s. She connects an early fascination with cinematic images of punishment and execution, especially electrocutions, to the attractions of the nineteenth-century carnival electrical wonder show and Phantasmagoria (a ghost show using magic lantern projections and special effects). Griffiths draws upon convict writing, prison annual reports, and the popular press obsession with prison-house cinema to document the integration of film into existing reformist and educational activities and film's psychic extension of flights of fancy undertaken by inmates in their cells. Combining penal history with visual and film studies and theories surrounding media's sensual effects, Carceral Fantasies illuminates how filmic representations of the penal system enacted ideas about modernity, gender, the body, and the public, shaping both the social experience of cinema and the public's understanding of the modern prison.

Alison Griffiths's examination of how movie exhibition came into prisons is truly groundbreaking. No one has studied the culture of moviegoing behind bars in this fashion before. A unique and absolutely exciting work! Dana Polan, author of Scenes of Instruction: The Beginnings of the U.S. Study of Film

Carceral Fantasies is a complex and highly original book that attends the intersections between various early cinema images of prisons and the real thing. Griffiths has a fascinating story to tell, in which she argues that we can view execution films as a kind of attraction—and in doing so are led to ponder: what constitutes an attraction? Jon Lewis, author of American Film: A History

Carceral Fantasies paints a complex, rich portrait of the historical relationship between cinema and the American penal system that crosses disciplinary borders and engages with a diverse body of scholarship. Groundbreaking in its historical exploration, rigorous and acrobatic in its theoretical intervention, and provocative in its call to action, Carceral Fantasies is a rewarding and important read for anyone interested in the history of American cinema. Film & History

A timely, challenging, and always thought-provoking text, Carceral Fantasies will become necessary reading for all working to map the medial administration of state terror and to imagine cinema’s capacities to glimpse beyond it. Canadian Journal of Film Studies

Carceral Fantasies is a fascinating look at the history of cinema and the penitentiary. Criminal Law and Criminal Justice Books

The original research she has performed, especially in understanding the nature of the carceral spectator, makes a significant contribution to film history, particularly film as a cultural artifact. She provides a glimpse of a nearly invisible audience that may have discovered in film their only connection to the world at large. In doing so, Griffiths brings light to what remains one of the most hidden places in our society. Wide Angle

Carceral Fantasies will certainly attract scholars who are interested in the development of this scholarship
about the silent era. The book will also be of value for those who are interested by nontheatrical film exhibition and the unique experience of watching films in prison. Historical Journal of Film, Radio, and Television

Alison Griffiths is professor of film and media studies at Baruch College and the City University of New York Graduate Center. Her Columbia University Press books are Shivers Down Your Spine: Cinema, Museums, and the Immersive View (2008) and Wondrous Difference: Cinema, Anthropology, and Turn-of-the-Century Visual Culture (2002).