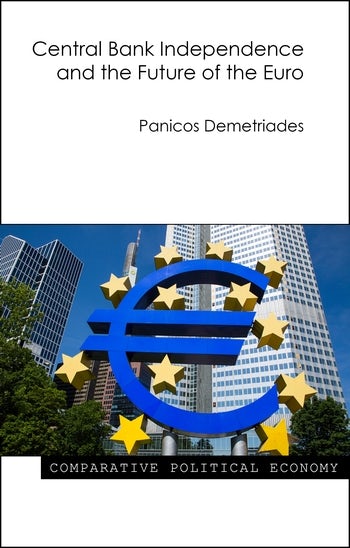 Over the past decade central banks have taken on new and expanded roles in an attempt to manage the global financial crisis. The European Central Bank (ECB) has been no exception. If anything, because of the incomplete architecture of the euro, the ECB has faced more serious challenges than either the Bank of England or the Federal Reserve. With the onset of the euro crisis, the ECB was forced to take on powers that went well beyond the conventions of standard monetary policy to prevent European Monetary Union from unraveling.

Panicos Demetriades, governor of the Central Bank of Cyprus during the country's bailout in 2013, examines the role of the ECB and its adoption of these new powers, which have led to legal and political challenges, high level resignations and the controversial removal of central bankers from their posts without due process. Demetriades argues that at a time when stability and action are needed to secure the future of the euro, the very foundations of the Euro-system are being eroded, namely, its ability to act independently. The book provides a lively and insightful account of the processes that can make or break the euro.

Panicos Demetriades is Professor of Financial Economics at the University of Leicester. Between May 2012 and April 2014, he served as Governor of the Central Bank of Cyprus and a member of the Governing Council of the European Central Bank. As Governor of the Central Bank of Cyprus, he oversaw a major restructuring and recapitalization of the Cypriot banking system and participated in discussions that led to the establishment of the Single Supervisory Mechanism in the euro area. His insights into the banking crisis in Cyprus have been published as Diary of the Euro Crisis in Cyprus: Lessons for Bank Recovery and Resolution (2017).