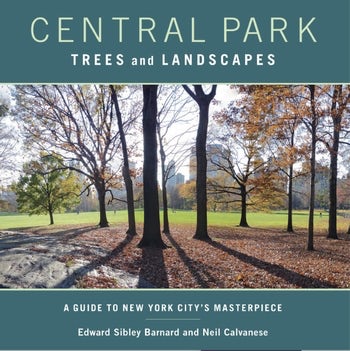 This is the ultimate field guide to the trees and landscapes of Central Park, with a lively, authoritative text and over 900 color photographs, botanical plates, and extraordinarily detailed maps.

Under the direction of the Central Park Conservancy, the park's landscapes have been painstakingly restored to achieve the effects envisioned more than 150 years ago by the park's designers, Frederick Law Olmsted and Calvert Vaux. This book highlights the leading role that trees play in defining 22 of these landscapes and chronicles the history of each of more than 200 tree species and varieties present in the park—where it came from and where the most outstanding specimens are located.

Besides being a superb guide to the world's greatest center-city park, this book is a highly informative guide to most of the tree species commonly encountered in the eastern United States. Anyone who loves trees will find this book a very rewarding read, full of fascinating details and beautiful illustrations.

"The Landscapes" opens with a geological account of Manhattan Island—from its position 500 million years ago on the edge of the proto–North American continent to its emergence about 15,000 years ago from the Laurentide Ice Sheet. The effects that human inhabitants had on the ecology of the island are described—from the burning of field stubble by Native Americans to the clearing of forest trees by Europeans. Next, the narrative focuses on the land that would eventually become Central Park—how it was saved from being dissected by John Randel's rigid street grid and how Frederick Law Olmsted and Calvert Vaux became the park's designers. The heart of the section is devoted to the construction of the park in the late 1850s and 1860s. Twenty-two of the park's grand landscapes are pictured in dozens of photographs and in seven detailed maps pinpointing nearly 20,000 trees. Readers can identify each tree on the maps by species using the Tree Maps Key (located on the back of the front flap).

"The Tree Guide" contains informative essays full of intriguing botanical and historical facts on over 200 of the park's tree species and varieties. Each two-page entry features illustrations of leaves, fruits, flowers, and bark as well as a striking portrait photograph of a park tree. The entries are organized into groups by leaf shapes shown on an easy-to-use identification key (located inside the front cover).

Here is an informative and breathtaking guide to Central Park's magnificent collection of trees and their glorious landscapes from Edward Sibley Barnard, a leading naturalist and author, working closely with Neil Calvanese, the park's former chief arborist who dedicated more than 30 years to the park's magnificent plantings. They have written a guide that is lovingly produced and easy to use. Anyone who loves Central Park and all who visit it will benefit from this timely new book. Sara Cedar Miller, author of Central Park, An American Masterpiece: A Comprehensive History of the Nation's First Urban Park

If this book were only a compendium of informative and beautifully illustrated entries on trees and their botanical characteristics and history, it would rank as a splendid achievement. Edward Sibley Barnard and Neil Calvanese have done this and then gone further. By making it possible to tour the Central Park landscape section by section with their words and Ken Chaya's excellent maps depicting the location of each species, Barnard and Calvanese have equipped the reader to receive an unparalleled plant-identification lesson and park experience at the same time. Elizabeth Barlow Rogers, founder, Central Park Conservancy

More than 900 color photographs and maps grace this Central Park guidebook, which looks at the vast landscape section by section. Booklist

A lushly illustrated reference book that will help you sound smarter than your children think you are. Sam Roberts, The New York Times

A book that will turn even the most hardened urbanite into a nature lover. Billy Heller, New York Post

A summer visit on Shabbat or any time to Central Park will be enriched by reading Central Park Trees and Landscapes. Sandee Brawarsky, The Jewish Week

A detailed but delightfully accessible Baedeker for both exploring the elegant vistas and identifying the species of trees. The New York Times

Edward Sibley Barnard is an editor and an author of several books on natural history, including New York City Trees. He lived near Central Park for over 40 years, frequently bicycling on the Drive and often stopping to photograph his favorite trees and landscapes. He now lives with his wife in Philadelphia.

Neil Calvanese was the Central Park Conservancy's vice president for operations. With a staff of 200, he oversaw all horticultural work in Central Park. He began working as an arborist in 1981 and participated in the park's renaissance. He retired in 2014 and moved with his wife to the Catskill Mountains in upstate New York.