Chaos in the Liberal Order

The Trump Presidency and International Politics in the Twenty-First Century 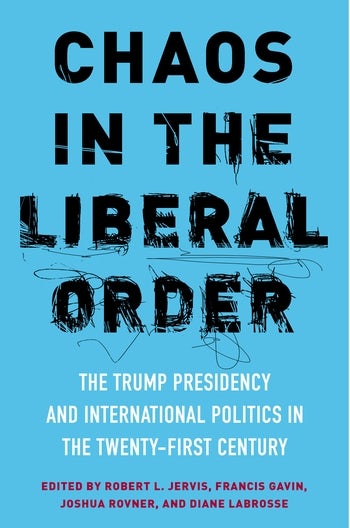 Chaos in the Liberal Order

The Trump Presidency and International Politics in the Twenty-First Century

Donald Trump’s election has called into question many fundamental assumptions about politics and society. Should the forty-fifth president of the United States make us reconsider the nature and future of the global order? Collecting a wide range of perspectives from leading political scientists, historians, and international-relations scholars, Chaos in the Liberal Order explores the global trends that led to Trump’s stunning victory and the impact his presidency will have on the international political landscape.

Contributors situate Trump among past foreign policy upheavals and enduring models for global governance, seeking to understand how and why he departs from precedents and norms. The book considers key issues, such as what Trump means for America’s role in the world; the relationship between domestic and international politics; and Trump’s place in the rise of the far right worldwide. It poses challenging questions, including: Does Trump’s election signal the downfall of the liberal order or unveil its resilience? What is the importance of individual leaders for the international system, and to what extent is Trump an outlier? Is there a Trump doctrine, or is America’s president fundamentally impulsive and scattershot? The book considers the effects of Trump’s presidency on trends in human rights, international alliances, and regional conflicts. With provocative contributions from prominent figures such as Stephen M. Walt, Andrew J. Bacevich, and Samuel Moyn, this timely collection brings much-needed expert perspectives on our tumultuous era.

Chaos in the Liberal Order is a sober guide for turbulent times. It covers an impressive range of issues and perspectives, giving insight into what’s new—and what’s not—in the Trump era. A must-read for anyone looking for context on the direction of American foreign policy in the Trump administration, and beyond. Elizabeth N. Saunders, George Washington University

A much-needed book that puts the Trump Administration into a proper international and historical perspective. It not only enlightens the reader about current affairs, but also helps us better understand some of the deeper causes for the crisis of liberal democracy. O. A. Westad, Harvard Kennedy School

The contribution of this book lies in its timeliness, creativity, and boldness in addressing a still evolving and changing Trump foreign policy. The essays address such important concerns as the future of liberal hegemony, domestic public opinion, and the impact of leaks and fake news on trust in the media. The authors provide a depth of analysis and historical perspective that ensures this book will provide insights into the forces underlying the Trump phenomenon for some time to come. Deborah Welch Larson, University of California, Los Angeles

The quality of the writing is excellent and the perspectives of each author differ substantially. H-Diplo

Introduction, by Robert Jervis, Francis J. Gavin, Joshua Rovner, and Diane Labrosse
Part I. Trump and International Relations Theory
1. President Trump and International Relations Theory, by Robert Jervis
2. What Is International Relations Theory Good For?, by Michael N. Barnett
3. Why Trump Now: A Third-Image Explanation, by Randall L. Schweller
4. The Donald Versus “The Blob,” by Stephen M. Walt
Part II. Is Liberal Internationalism Still Alive?
5. Has Liberal Internationalism Been Trumped?, by Joshua Busby and Jonathan Monten
6. Down but Not Out: A Liberal International American Foreign Policy, by Stephen Chaudoin, Helen V. Milner, and Dustin Tingley
7. Does Structure Trump All? A Test of Agency in World Politics, by Brian Rathbun
8. Liberal Internationalism, Public Opinion, and Partisan Conflict in the United States, by Robert Y. Shapiro
Part III. Whither Pax Americana?
9. Trump Against American Exceptionalism: The Sources of Trumpian Conduct, by Stephen Wertheim
10. This Is What Nationalism Looks Like, by Thomas W. Zeiler
11. The Appeal of “America First”, by John A. Thompson
12. The Waning of the Postwar Order: Historical Reflections on 2016 and the Emergence of a Twenty-First-Century World Order, by T.G. Otte
13. The Failed Promises of 1989 and the Politics of 2016, by Jonathan Sperber
14. Trump’s Ascendancy as History, by Ryan Irwin
15. Assessing Trump’s Emerging Counterterrorism Policy, by Daniel Byman
16. The “Global Order” Myth, by Andrew J. Bacevich
Part IV. Trump and the World
17. Donald Trump and NATO: Historic Alliance Meets A-historic President, by Stanley R. Sloan
18. The Art of the Bluff: The US-Japan Alliance Under the Trump Administration, by Jennifer Lind
19. Latin America: Asymmetry and the Problem of Influence, by Tom Long and Max Paul Friedman
20. Historical Legacies of United States Policy in the Middle East, by James R. Stocker
21. Donald Trump and the Middle East, by F. Gregory Gause, III
22. US-Russia Relations Unhinged, by Robert Legvold
23. The View from the Asia-Pacific: Loose Nukes and Loose Cannons, by Priscilla Roberts
24. The Future of the Atlantic Alliance Under President Trump, by William R. Keylor
Part V. The Language and Legacy of Human Rights
25. The United States and the Global Human Rights Order, by Mark Philip Bradley
26. Donald Trump and the Irrelevance of Human Rights, by Samuel Moyn
Part VI. The Fourth Estate, Leaks, and Fake News: Historical Perspectives
27. Donald Trump and the “Paranoid Style” in American (Intellectual) Politics, by Leo P. Ribuffo
28. Leaking About Donald Trump in the Age of Fake News, by Sam Lebovic
29. Why Does Donald Trump Have So Much Trouble with the Truth?, by John Schuessler
30. Is Donald Trump Jimmy Carter, or Is He Kaiser Wilhelm II?, by Nancy Mitchell
31. Aristocracy, Oligarchy, and Donald Trump, by Arthur Eckstein
Part VII. Is There a Trump Doctrine?
32. Trumpism, History, and the Future of US Foreign Relations, by Frank Ninkovich
About the Contributors
Index

Francis J. Gavin is the Giovanni Agnelli Distinguished Professor and the inaugural director of the Henry A. Kissinger Center for Global Affairs at the Johns Hopkins School of Advanced International Studies. His books include Nuclear Statecraft: History and Strategy in America's Atomic Age (2012).

Joshua Rovner is associate professor in the School of International Service at American University. His books include Fixing the Facts: National Security and the Politics of Intelligence (2011).