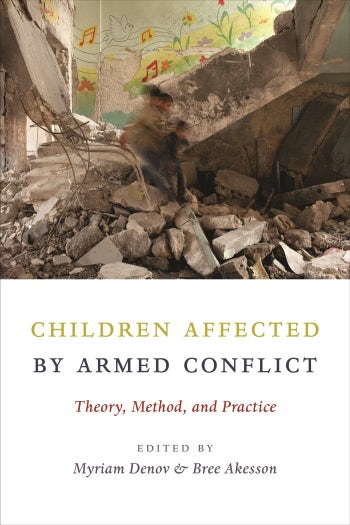 Children Affected by Armed Conflict upends traditional views by emphasizing the experience of girls as well as boys, the unique social and contextual backgrounds of war-affected children, and the resilience and agency such children often display. Including children who are victims of, participants in, and witnesses to armed conflict in their analyses, the contributors to this volume highlight innovative methodologies that directly involve war-affected children in the research process. This validates the perspectives of children and ensures more effective outcomes in postwar reintegration and recovery. Deficits-based models do not account for the realities many war-affected children face. The alternative approaches presented in this edited collection—which acknowledge the realities of both trauma and resilience—aim to generate more effective policies and intervention strategies in the face of a growing global public health crisis.

This timely and impressive volume utilizes a socioecological framework to examine the experiences of children affected by armed conflict. Using a holistic approach that considers children’s diverse cultures and contexts, the contributors illuminate the complexities of war and postwar realities on the everyday lives of children. Sophie Yohani, University of Alberta

This is a powerful book—a must-read. Its strength lies in its empathy; and in how it eschews categories, avoids simplicity, transcends binaries, and turns limits into opportunities. While recognizing their suffering, and doing so with great sensitivity, this book also foregrounds the humanity, resilience, intrepidness, and potential of all children affected by armed violence. Mark Drumbl, Washington and Lee University

Far from sparing children, war exposes young persons to physical harm and other deprivations, including separation from family and forcible displacement. This volume draws on case studies from across the globe to provide an invaluable, contemporary analysis of theories, methods, and practices by which to address the needs of children affected by armed conflict. Diane Marie Amann, University of Georgia

Myriam Denov is a full professor and holds the Canada Research Chair in Youth, Gender, and Armed Conflict at McGill University. Her research centers on international child protection, the effects of war and migration on children and families, as well as participatory and arts-based research approaches. She is the author or coauthor of five books, including Child Soldiers: Sierra Leone's Revolutionary United Front (2010) and Children's Rights and International Development: Lessons and Challenges from the Field (2011).

Bree Akesson is an assistant professor in the Faculty of Social Work at Wilfrid Laurier University in Canada. Her research focuses on international child protection, psychosocial effects of war and disaster on children and families, and global social work practice.