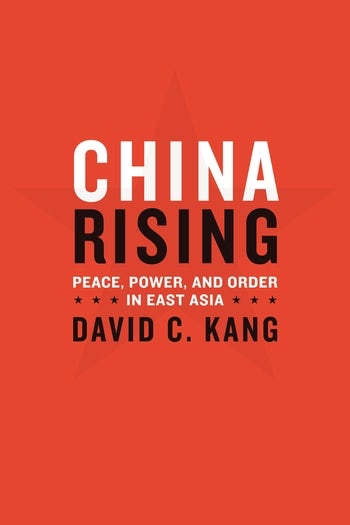 Throughout the past three decades East Asia has seen more peace and stability than at any time since the Opium Wars of 1839-1841. During this period China has rapidly emerged as a major regional power, averaging over nine percent economic growth per year since the introduction of its market reforms in 1978. Foreign businesses have flocked to invest in China, and Chinese exports have begun to flood the world. China is modernizing its military, has joined numerous regional and international institutions, and plays an increasingly visible role in international politics. In response to this growth, other states in East Asia have moved to strengthen their military, economic, and diplomatic relations with China. But why have these countries accommodated rather than balanced China's rise?

David C. Kang believes certain preferences and beliefs are responsible for maintaining stability in East Asia. Kang's research shows how East Asian states have grown closer to China, with little evidence that the region is rupturing. Rising powers present opportunities as well as threats, and the economic benefits and military threat China poses for its regional neighbors are both potentially huge; however, East Asian states see substantially more advantage than danger in China's rise, making the region more stable, not less. Furthermore, although East Asian states do not unequivocally welcome China in all areas, they are willing to defer judgment regarding what China wants and what its role in East Asia will become. They believe that a strong China stabilizes East Asia, while a weak China tempts other states to try to control the region.

Many scholars downplay the role of ideas and suggest that a rising China will be a destabilizing force in the region, but Kang's provocative argument reveals the flaws in contemporary views of China and the international relations of East Asia and offers a new understanding of the importance of sound U.S. policy in the region.

A refreshing read... should be required reading for everyone concerned about the rise of China or East Asian international relations. Andrew Scobell, Texas A&M University, Political Science Quarterly

Any serious student of Asia will find China Rising challenging, and will give that reader a good deal to consider--and perhaps rethink. John Frankenstein, Far Eastern Economic Review

Clearly written and cogently argued, this book is essential reading for all audiences. CHOICE

David C. Kang is a professor of international relations and business at the University of Southern California. He is the author of Crony Capitalism: Corruption and Development in South Korea and the Philippines and, with Victor Cha, Nuclear North Korea: A Debate on Engagement Strategies. He is a regular media commentator, and has published opinion pieces in the New York Times and the Washington Post. Kang is also a frequent consultant to both multinational corporations and U.S. government agencies, including the CIA, National Intelligence Council, and State Department.