Amoghavajra, the Ruling Elite, and the Emergence of a Tradition 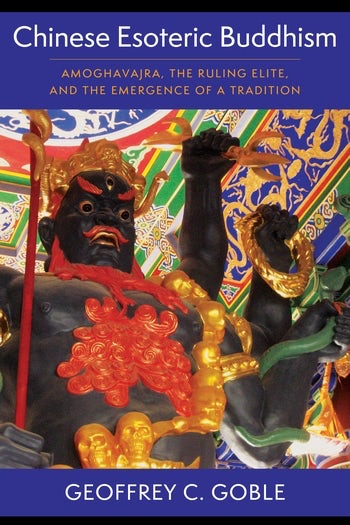 Amoghavajra, the Ruling Elite, and the Emergence of a Tradition

Chinese Esoteric Buddhism is generally held to have been established as a distinct and institutionalized Buddhist school in eighth-century China by “the Three Great Masters of Kaiyuan”: Śubhākarasiṃha, Vajrabodhi, and Amoghavajra. Geoffrey C. Goble provides an innovative account of the tradition’s emergence that sheds new light on the structures and traditions that shaped its institutionalization.

Goble focuses on Amoghavajra (704–774), contending that he was the central figure in Esoteric Buddhism’s rapid rise in Tang dynasty China, and the other two “patriarchs” are known primarily through Amoghavajra’s teachings and writings. He presents the scriptural, mythological, and practical aspects of Chinese Esoteric Buddhism in the eighth century and places them in the historical contexts within which Amoghavajra operated. By telling the story of Amoghavajra’s rise to prominence and of Esoteric Buddhism’s corresponding institutionalization in China, Goble makes the case that the evolution of this tradition was predicated on Indic scriptures and practical norms rather than being the product of conscious adaptation to a Chinese cultural environment. He demonstrates that Esoteric Buddhism was employed by Chinese rulers to defeat military and political rivals. Based on close readings of a broad range of textual sources previously untapped by English-language scholarship, this book overturns many assumptions about the origins of Chinese Esoteric Buddhism.

Carefully attending to historical context, Goble clarifies Amoghavajra's role as propagator of Buddhist tantras in China. Demonstrating how his teachings found favor by conforming to Tang dynasty imperial religion and by promoting lethal rites, Goble then traces Amoghavajra's political and religious legacy and his function as an index for the collection and circulation of texts and discourses in subsequent Chinese Buddhist history. Charles D. Orzech, Colby College

Goble's treatment demonstrates that Amoghavajra is one of the preeminent figures in the history of Buddhism, not just in East Asia but in the entire history of Buddhism. As a Buddhist thinker and practitioner Amoghavajra stands equal to any other landmark figure. Goble's definitive study brings new clarity to the debate over the nature, practices, and institutional existence of an Esoteric Buddhism in Tang China. In fact that debate can now be considered closed. Richard K. Payne, Institute of Buddhist Studies

Amoghavajra stands out as a towering beacon in the history of Esoteric Buddhism in China, and no study on this important Buddhist tradition would be complete without referring to him and his achievements. In this new study Geoffrey C. Goble takes a critical look at Amoghavajra and his legacy, and in this process undertakes an in-depth investigation into the primary sources, in particular those which elucidate the Buddhist master's intimate relationship with the Tang court and the country's political elite during the middle and second half of the eighth century. Goble's study is therefore as much about elite religion as it is about the interface between the Buddhist religion and politics in late medieval China. A must for anyone interested in Tang history and Esoteric Buddhism. Henrik H. Sørensen, Ruhr University

Geoffrey C. Goble is assistant professor of religious studies at the University of Oklahoma.