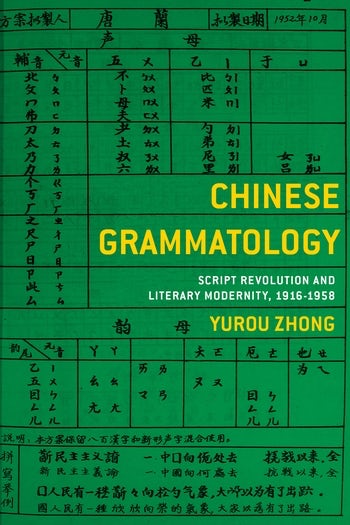 Today, Chinese characters are described as a national treasure, the core of the nation’s civilizational identity. Yet for nearly half of the twentieth century, reformers waged war on the Chinese script. They declared it an archaic hindrance to modernization, portraying the ancient system of writing as a roadblock to literacy and therefore science and democracy. Movements spanning the political spectrum proposed abandonment of characters and alphabetization of Chinese writing, although in the end the Communist Party opted for character simplification.

Chinese Grammatology traces the origins, transmutations, and containment of this script revolution to provide a groundbreaking account of its formative effects on Chinese literature and culture, and lasting implications for the encounter between the alphabetic and nonalphabet worlds. Yurou Zhong explores the growth of competing Romanization and Latinization movements aligned with the clashing Nationalists and Communists. She finds surprising affinities between alphabetic reform and modern Chinese literary movements and examines the politics of literacy programs and mass education against the backdrop of war and revolution. Zhong places the Chinese script revolution in the global context of a phonocentric dominance that privileges phonetic writing, contending that the eventual retention of characters constituted an anti-ethnocentric, anti-imperial critique that coincided with postwar decolonization movements and predated the emergence of Deconstructionism. By revealing the consequences of one of the biggest linguistic experiments in history, Chinese Grammatology provides an ambitious rethinking of the origins of Chinese literary modernity and the politics of the science of writing.

One of the most innovative, exemplary, and deeply researched monographs in modern Chinese literary studies I have seen for quite some time. Andrew F. Jones, University of California, Berkeley

Offering a valuable history of the Chinese encounter with the Roman-Latin alphabetic writing system, Chinese Grammatology provides a compelling account of the rise and containment of phonocentrism as a global literary, linguistic, and political force with profound implications for the development of modern “national” literatures during the twentieth century. Nergis Ertürk, Pennsylvania State University

This long overdue study of competing twentieth-century efforts to modernize Chinese writing goes far beyond the origins of pinyin to include a series of compelling stories about all-but-forgotten movements that will fascinate anyone interested in linguistics, Chinese literature, and the history of modernity. Deeply researched and carefully presented, Chinese Grammatology is a page-turner for culture nerds, which makes a persuasive case for the influence of the ideologies of script reform on the evolution of modern Chinese literature. A must-read for anyone interested in cultural China. Timothy Billings, Middlebury College

Saussure's Cours de linguistique générale (1916) and Derrida's De la grammatologie (1967) are two milestones that have far-reaching implications for 20th-century scholarship in the humanities. Under the influence of these two works, phonetics and logocentrism gradually became one of the concerns for scholars of humanities. However, how do we deal with the perceived voicelessness in nonphonetic scripts? How do we rediscover and understand the rich and tense historical processes that sought to reform and even eliminate the Chinese script for the past century? These substantial questions form the backbone of Chinese Grammatology. It builds on theoretical exploration, historical research, and case studies covering classical philology, the influence of romanization, the latinization movement in modern China, and more. Solid research, broad vision, and sharp observations enliven the whole book. Wang Hui, Tsinghua University

Yurou Zhong is assistant professor of East Asian studies at the University of Toronto.