Ying-shih Yü. With the Editorial Assistance of Josephine Chiu-Duke and Michael S. Duke. 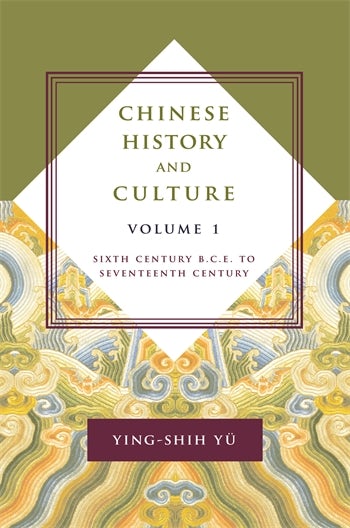 Ying-shih Yü. With the Editorial Assistance of Josephine Chiu-Duke and Michael S. Duke.

The recipient of the Kluge Prize for lifetime achievement in the humanities and the Tang Prize for "revolutionary research" in Sinology, Ying-shih Yü is a premier scholar of Chinese studies. Chinese History and Culture volumes 1 and 2 bring his extraordinary oeuvre to English-speaking readers. Spanning two thousand years of social, intellectual, and political change, the essays in these volumes investigate two central questions through all aspects of Chinese life: what core values sustained this ancient civilization through centuries of upheaval, and in what ways did these values survive in modern times?

From Yü Ying-shih's perspective, the Dao, or the Way, constitutes the inner core of Chinese civilization. His work explores the unique dynamics between Chinese intellectuals' discourse on the Dao, or moral principles for a symbolized ideal world order, and their criticism of contemporary reality throughout Chinese history. Volume 1 of Chinese History and Culture explores how the Dao was reformulated, expanded, defended, and preserved by Chinese intellectuals up to the seventeenth century, guiding them through history's darkest turns. Essays incorporate the evolving conception of the soul and the afterlife in pre- and post-Buddhist China, the significance of eating practices and social etiquette, the move toward greater individualism, the rise of the Neo-Daoist movement, the spread of Confucian ethics, and the growth of merchant culture and capitalism. A true panorama of Chinese culture's continuities and transition, Yü Ying-shih's two-volume Chinese History and Culture gives readers of all backgrounds a unique education in the meaning of Chinese civilization.

Very few people can, as Ying-shih Yü has done, so thoroughly contribute to the study of China, whether ancient times or modern times, intellectual history, social history, cultural history, or any other number of disciplines. Despite the numerous topics, Yü's essays manage to be incredibly rich, groundbreaking, and enlightening. This truly is a superb collection of his most important scholarly works in the English language. Ge Zhaoguang, author of An Intellectual History of China: Knowledge, Thought, and Belief Before the Seventh Century C.E.

The breadth and depth of knowledge presented in this collection of Ying-shih Yü essays and lectures is a treasure trove for readers interested in Chinese history. The topics range from early ideas about immortality to later ideas about the social standing of men of business. No other publication in English compares in terms of command of traditional Chinese sources and sensitivity to contemporary historiographical issues, all mobilized in the service of better understanding China's past in relation to China's present. Willard Peterson, Gordon Wu '58 Professor of Chinese Studies, Princeton University

This anthology compiles Ying-shih Yü's many years of research on Chinese history and culture and features the most important topics and turning points in Chinese history. Yü's English publications and texts are the highlights and summaries of his best work in Chinese, and this book will allow scholars from the English-speaking world firsthand access to Yü's many accomplishments and open myriads of dialogue. Chin-shing Huang, Academia Sinica (Taipei)

If one were to recommend a single book for providing an excellent introduction to the historical foundations the culture of the Chinese people, this book is easily the one. New Books Asia

With the publication of this collection, which is a microcosm of Yü’s encompassing intellectual world, more and more English readers will perhaps join their Chinese counterparts to become members of the “Yü Ying-shih fan clubs." Q. Edward Wang, The Chinese Historical Review

Author's Preface
Editorial Note
List of Abbreviations
Chronology of Dynasties
1. Between the Heavenly and the Human
2. Life and Immortality in the Mind of Han China
3. "O Soul, Come Back!" A Study in the Changing Conceptions of the Soul and Afterlife in Pre-Buddhist China
4. New Evidence on the Early Chinese Conception of Afterlife
5. Food in Chinese Culture: The Han Period
6. The Seating Order at the Hong Men Banquet
7. Individualism and the Neo-Daoist Movement in Wei-Jin China
8. Intellectual Breakthroughs in the Tang-Song Transition
9. Morality and Knowledge in Zhu Xi's Philosophical System
10. Confucian Ethics and Capitalism
11. Business Culture and Chinese Traditions—Toward a Study of the Evolution of Merchant Culture in Chinese History
12. Reorientation of Confucian Social Thought in the Age of Wang Yangming
13. The Intellectual World of Jiao Hong Revisited
14. Toward an Interpretation of Intellectual Transition in the Seventeenth Century
Acknowledgments
Appendix. The John W. Kluge Prize Address and The Tang Prize for Sinology Acceptance Speech
Index

Ying-shih Yü is a preeminent historian of China. Awarded the John W. Kluge Prize for achievement in the Study of Humanity and the inaugural Tang Prize International Award in Sinology, he has published more than thirty books and five hundred articles and essays on Chinese history, thought, politics, and culture. His most recent works include Lun tian ren zhi ji (Between Heaven and the Human: An Exploration of the Origin of Ancient Chinese Thought, 2014), Zhu Xi de lishi shijie (The Historical World of Zhu Xi: A Study of the Political Culture of Song Intellectuals, 2003, 2011), and Shi yu Zhongguo wenhua (Chinese Intellectuals and Chinese Culture, 2003, 2010, and 2013).

Josephine Chiu-Duke is associate professor of Chinese intellectual history in the Asian Studies Department at the University of British Columbia. She is the author of To Rebuild the Empire: Lu Chih's Confucian Pragmatist Approach to the Mid-T'ang Predicament (2000), editor of Liberalism and the Humanistic Tradition—Essays in Honor of Professor Lin Yü-sheng (2005), and co-translator of Ge Zhaoguang's An Intellectual History of China, Volume 1: Knowledge, Thought, and Belief Before the Seventh Century C.E. (2014).

Michael S. Duke is professor emeritus of Chinese and comparative literature at the University of British Columbia. He is the author of several books on modern and traditional Chinese literature, including Blooming and Contending: Chinese Literature in the Post-Mao Era (1985), translator of Koonchung Chan's The Fat Year (2011), and co-translator of Ge Zhaoguang's An Intellectual History of China, Volume 1 (2014).