Records of the 1827 Osaka Incident

Translated and with an introduction by Fumiko Miyazaki, Kate Wildman Nakai, and Mark Teeuwen 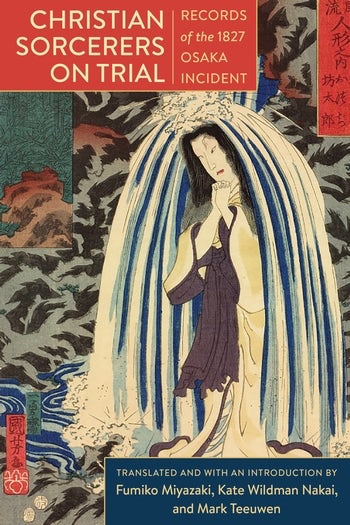 Records of the 1827 Osaka Incident

Translated and with an introduction by Fumiko Miyazaki, Kate Wildman Nakai, and Mark Teeuwen

In 1829, three women and three men were paraded through Osaka and crucified. Placards set up at the execution ground proclaimed their crime: they were devotees of the “pernicious creed” of Christianity. Middle-aged widows, the women made a living as mediums, healers, and fortune-tellers. Two of the men dabbled in divination; the third was a doctor who collected books in Chinese on Western learning and Christianity.

This was a startling development. No one in Japan had been identified and punished as a Christian for more than a century, and now, avowed devotees of the proscribed sect had appeared in the very heart of the realm. Just decades before the arrival of Perry’s black ships and the fall of the Tokugawa shogunate, the incident reignited fears of Christians as evil sorcerers, plotting to undermine society and overthrow the country.

Christian Sorcerers on Trial offers annotated translations of a range of sources on this sensational event, from the 1827 arrest of the alleged Christians through the case’s afterlife. The protagonists’ testimonies relate with striking detail their life histories, practices, and motivations. The record of deliberations in Edo and communications between Osaka and Edo officials illuminate the operation of the Tokugawa system of criminal justice. Retellings of the incident show how the story was transmitted and received. Translated and put in context by Fumiko Miyazaki, Kate Wildman Nakai, and Mark Teeuwen, the sources provide students and scholars alike with an extraordinarily rich picture of late Edo social life, religious practices, and judicial procedures.

Christian Sorcerers on Trial is a fascinating, startling, and revealing introduction to and translation of rich primary texts from a little-known but important episode in Japanese religious and cultural history. Scholars of Japanese religion, Japanese history, and Christian history will benefit from it. Elizabeth Morrison, Middlebury College

Mark Teeuwen is professor of Japanese studies at the University of Oslo.

Miyazaki, Nakai, and Teeuwen previously collaborated (with Anne Walthall and John Breen) on a translation of another late Edo source: Lust, Commerce, and Corruption: An Account of What I Have Seen and Heard by an Edo Samurai (Columbia, 2014).