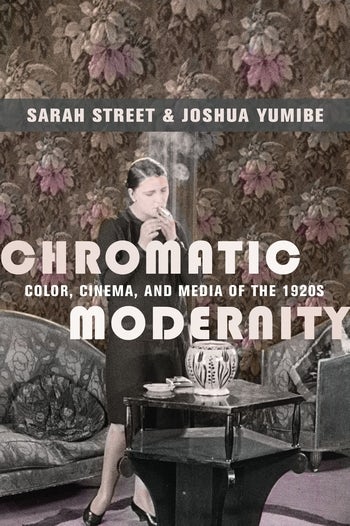 The era of silent film, long seen as black and white, has been revealed in recent scholarship as bursting with color. Yet the 1920s remain thought of as a transitional decade between early cinema and the rise of Technicolor—despite the fact that new color technologies used in film, advertising, fashion, and industry reshaped cinema and consumer culture. In Chromatic Modernity, Sarah Street and Joshua Yumibe provide a revelatory history of how the use of color in film during the 1920s played a key role in creating a chromatically vibrant culture.

Focusing on the final decade of silent film, Street and Yumibe portray the 1920s as a pivotal and profoundly chromatic period of cosmopolitan exchange, collaboration, and experimentation in and around cinema. Chromatic Modernity explores contemporary debates over color’s artistic, scientific, philosophical, and educational significance. It examines a wide range of European and American films, including Opus 1 (1921), L’Inhumaine (1923), Die Nibelungen (1924), The Phantom of the Opera (1925), The Lodger (1927), Napoléon (1927), and Dracula (1932). A comprehensive, comparative study that situates film among developments in art, color science, and industry, Chromatic Modernity reveals the role of color cinema in forging new ways of looking at and experiencing the modern world.

Chromatic Modernity makes a brilliant contribution to the history of color in film. Focusing on the pivotal period of the 1920s, the book skillfully situates modernist cinema within a sweeping "chromatic revolution" that impacted everything from fashion and advertising to urban planning and interior design. In so doing, it shows conclusively why color matters to film history—and why cinema mattered to the chromatic culture of modernity. Michael Cowan, University of St Andrews

This book differs from other studies of film color in its interdisciplinary approach. The authors have gone to great lengths to explore the cultural use of color outside of films and how that influenced and informed technical developments and audience tastes in cinema. I cannot think of a pair more qualified to analyze such overlooked cinema than Street and Yumibe. The convergence of these experts benefits their research and the text they have written. James Layton, coauthor of The Dawn of Technicolor, 1915-1935

Arguing against assumptions that intermediality decreases with the formation of the classical Hollywood system, Street and Yumibe assert that the twenties are, in fact, a key decade for cinematic engagement across art forms in the development of this heightened color consciousness. The focus on the transnational intellectual, aesthetic, and industrial cross influences between the United States and Europe and the historical synthesis of a large literature on the color revolution are two significant features of this book. Kirsten Moana Thompson, Seattle University

Illustrations
Acknowledgments
Introduction
1. Color Standards and the Industrial Field of Film
2. Advertising, Fashion, and Color
3. Synthetic Dreams: Expanded Spaces of Cinema
4. Color in the Art and Avant-Garde of the 1920s
5. Chromatic Hybridity
6. Color and the Coming of Sound
7. Conclusion
Notes
Selected Bibliography
Index

Sarah Street is professor of film at the University of Bristol. She is the author of Colour Films in Britain: The Negotiation of Innovation, 1900–55 (2012) and Deborah Kerr (2018), among other works.

Joshua Yumibe is associate professor and director of the Film Studies Program at Michigan State University. He is the author of Moving Color: Early Film, Mass Culture, Modernism (2012) and coauthor of Fantasia of Color in Early Cinema (2015).