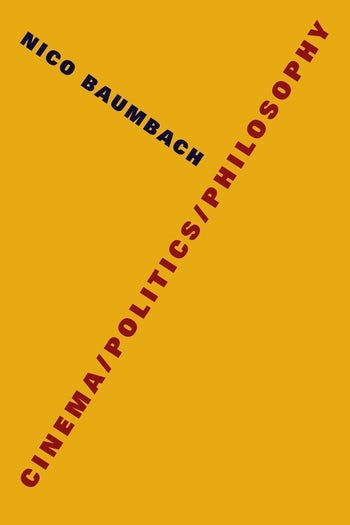 Almost fifty years ago, Jean-Louis Comolli and Jean Narboni published the manifesto “Cinema/Ideology/Criticism,” helping to set the agenda for a generation of film theory that used cinema as a means of critiquing capitalist ideology. In recent decades, film studies has moved away from politicized theory, abandoning the productive ways in which theory understands the relationship between cinema, politics, and art. In Cinema/Politics/Philosophy, Nico Baumbach revisits the much-maligned tradition of seventies film theory to reconsider: What does it mean to call cinema political?

In this concise and provocative book, Baumbach argues that we need a new philosophical approach that sees cinema as both a mode of thought and a form of politics. Through close readings of the writings on cinema by the contemporary continental philosophers Jacques Rancière, Alain Badiou, and Giorgio Agamben, he asks us to rethink both the legacy of ideology critique and Deleuzian film-philosophy. He explores how cinema can condition philosophy through its own means, challenging received ideas about what is seeable, sayable, and doable. Cinema/Politics/Philosophy offers fundamental new ways to think about cinema as thought, art, and politics.

This is a good book for cinephiles, particularly those of a more intellectual bent. Ryne Clos, Spectrum Culture

Baumbach’s text will undoubtedly serve as a crucial launch pad of thinking on cinema. Daniel Fairfax, Senses of Cinema

In this lucid and insightful book, Nico Baumbach offers a much-needed critical account of new European philosophies of the image. Pairing Rancière with Althusser, Badiou with Deleuze, and Agamben with Benjamin, Baumbach demonstrates convincingly how these influential philosophers remap the relation of philosophy to film in ways continuous with the recent history of film theory, while in turn offering his own powerful perspective on the relation between aesthetics and politics. D. N. Rodowick, Glen A. Lloyd Distinguished Service Professor, University of Chicago

In this nuanced book, Nico Baumbach digs into contemporary European philosophy and its intersection with cinema, art, and aesthetics. Focusing on the trio of Rancière, Badiou, and Agamben, Baumbach makes a compelling case that such theorists, having already influenced discussions in literature and philosophy, also offer a new path for the future of cinema and media studies. Ultimately the question is not so much how film represents the world, or the material reality of affect or sensation, but how cinema itself is directly philosophical and political. Alexander R. Galloway, Professor of Media, Culture, and Communication at New York University

Film theory of the 1970s is not dead. True, we understand now that ideology critique and détournement are not the sole tools available to the political theorist or maker. In Cinema/Politics/Philosophy, Nico Baumbach shows that Rancière, Deleuze, Badiou, and Agamben—frequently set in opposition to their predecessors—in fact continue their work, while also illuminating exit signs from its various culs-de-sac. More urgently, Baumbach reveals the massive consequences when cinema is reduced to data, whether by celebrants of so-called “grand theory” or by its detractors. Cinema is not simply political or apolitical, a set of good or bad objects; it is itself a form of politics and a mode of thought. Provocative and timely, Cinema/Politics/Philosophy suggests that film’s political capacities are not opposed to, but rather inextricable from its capacity for thought and art. Homay King, Professor and Eugenia Chase Guild Chair in the Humanities, Bryn Mawr College

Nico Baumbach is associate professor of film and media studies at Columbia University.