How to Read Opening Scenes 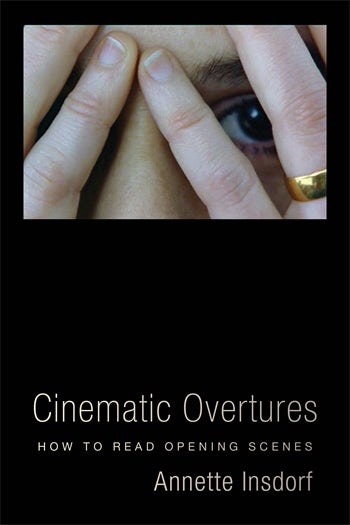 How to Read Opening Scenes

A great movie’s first few minutes provide the key to the rest of the film. Like the opening paragraphs of a novel, they draw the viewer in, setting up the thematic concerns and stylistic approach that will be developed over the course of the narrative. A strong opening sequence leads the viewer to trust the filmmakers. Other times, opening shots are intentionally misleading as they invite alert, active participation with the film. In Cinematic Overtures, Annette Insdorf discusses the opening sequence so that viewers turn first impressions into deeper understanding of cinematic technique.

From Joe Gillis’s voice-over in Sunset Boulevard as he lies dead in a swimming pool to the hallucinatory opening of Apocalypse Now, from the stream-of-consciousness montage as found in Hiroshima, mon amour to the slowly unfolding beginning of Schindler’s List, Cinematic Overtures analyzes opening shots from a range of Hollywood as well as international films. Insdorf pays close attention to how the viewer makes sense of these scenes and the cinematic world they are about to enter. Including dozens of frame enlargements that illustrate the strategies of opening scenes, Insdorf also examines how films explore and sometimes critique the power of the camera’s gaze. Along with analyses of opening scenes, the book offers a series of revelatory and surprising readings of individual films by some of the leading directors of the past seventy-five years. Erudite but accessible, Cinematic Overtures will lead film scholars and ardent movie fans alike to greater attentiveness to those fleeting opening moments.

In this brief but richly stimulating book on beginnings, Annette Insdorf opens up a treasure chest of insights and sensory delights. The films of Altman, Kaufman, Welles, Bertolucci, Coppola, along with the work of exciting lesser-known foreign auteurs, come alive through her precise descriptions of opening scenes and credit sequences. In examining the interplay of music and image, or the many stylistic choices made by a director, she draws us ever more compellingly into the films themselves, while subtly charting the broader course of movies as they come to reflect a more fragmented and self-questioning world. Like the best critics and teachers, she not only inspires us to track down unknown films, and return to favorites with renewed curiosity, but shows us how to think more alertly and knowledgeably in future movie-watching. Molly Haskell, author of Steven Spielberg: A Life in Films

We knew it already, but Annette Insdorf has identified the condition: the first moments of a movie are electric, a going into some new world while giving up our safety. With brilliant examples, this short survey of beginnings is one of the best provocations in print to having us see entire movies—the openings that go on forever. David Thomson, author of A Biographical Dictionary of Film and Warner Bros: The Story of an American Movie Studio

Like a wise guide unveiling mysteries, Annette Insdorf in Cinematic Overtures shows with wit and insight the many ways movies from their first moments teach us how to watch and understand their special worlds. Leo Braudy, Leo S. Bing Chair in English and American Literature, University of Southern California

Cinematic Overtures is about openings; it serves as an opening to a much wider field of films. It is, therefore, a kind of overture itself. It's surprising that nobody has thought to do this before, and it leads to a fascinating subject ripe for in-depth discussion. This book's strengths lie in the erudition Annette Insdorf brings to the subject, her extensive experience of writing about and teaching film, and the precision of her formal analysis. Ed Sikov, author of Film Studies: An Introduction

Annette Insdorf has written an exhortation to closer engagement, even from the casual audience members, while offering plenty of insights for the reader already familiar with film theory. Imogen West-Knights, Times Literary Supplement

This is film criticism at its best: informed but not didactic, written in direct, clear language, the work of a true master. Choice

These thoughtful, carefully considered essays offer fresh perspectives on Sunset Blvd., Psycho, Apocalypse Now, The Graduate, Touch of Evil, Aguirre: The Wrath of God, and many more. . . . Whether you digest one chapter at a time or swallow it whole, this scholarly paperback provides a great deal of food for thought. Leonard Maltin

An expansive and highly engaging ode to the value of close reading. . . . Insdorf builds her case that a movie’s opening scene does not just establish narrative information or mood but functions as a toolbox, providing spectators with instruments to conceptually and emotionally cohere the film that is about to unfold and, equally crucially, to assemble the ways that the film connects to the audience’s world. The book is a refreshing and highly pleasurable plunge into style’s persistent specificity. Kyle Stevens, Critical Inquiry

Annette Insdorf is a professor in the Film Program of Columbia University’s School of the Arts and host of the Reel Pieces series at Manhattan’s 92nd Street Y. Her books include Francois Truffaut (1979), Indelible Shadows: Film and the Holocaust (1983), Double Lives, Second Chances: The Cinema of Krzysztof Kieslowski (1999), Philip Kaufman (2012), and Intimations: The Cinema of Wojciech Has (2017).