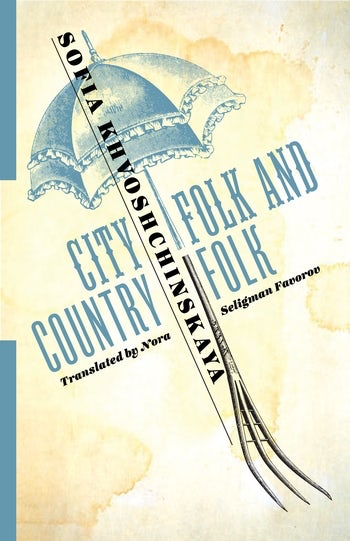 An unsung gem of nineteenth-century Russian literature, City Folk and Country Folk is a seemingly gentle yet devastating satire of Russia's aristocratic and pseudo-intellectual elites in the 1860s. Translated into English for the first time, the novel weaves an engaging tale of manipulation, infatuation, and female assertiveness that takes place one year after the liberation of the empire's serfs.

Upending Russian literary clichés of female passivity and rural gentry benightedness, Sofia Khvoshchinskaya centers her story on a common-sense, hardworking noblewoman and her self-assured daughter living on their small rural estate. The antithesis of the thoughtful, intellectual, and self-denying young heroines created by Khvoshchinskaya's male peers, especially Ivan Turgenev, seventeen-year-old Olenka ultimately helps her mother overcome a sense of duty to her "betters" and leads the two to triumph over the urbanites' financial, amorous, and matrimonial machinations.

Sofia Khvoshchinskaya and her writer sisters closely mirror Britain's Brontës, yet Khvoshchinskaya's work contains more of Jane Austen's wit and social repartee, as well as an intellectual engagement reminiscent of Elizabeth Gaskell's condition-of-England novels. Written by a woman under a male pseudonym, this brilliant and entertaining exploration of gender dynamics on a post-emancipation Russian estate offers a fresh and necessary point of comparison with the better-known classics of nineteenth-century world literature.

Where’s Khvoshchinskaya been all my life? A must-read. M. Bartley Seigel, Words Without Borders

Favorov’s brisk translation and helpful notes make the novel very accessible to present-day readers. This consistently delightful satire will introduce readers to a funnier, more female-centric slant on Russian literature than they may have previously encountered. Publishers Weekly (starred review)

In its first English translation since its publication in Russia in the mid-19th century, City Folk and Country Folk offers us a fascinating look at gender dynamics in a nation that had just liberated the empire’s serfs. Rachel Cordasco, BookRiot

This really is what it claims to be, an unsung gem of nineteenth-century Russian literature, it was a delightful read that reminds me of the English classics, like Pride and Prejudice. What’s better than biting wit? Lolly K. Dandeneau, bookstalkerblog

In her sympathetic depiction of the central mother-daughter relationship Khvoshchinskaya stakes her own territory and widens the boundaries of the 19th-century Russian novel. . . . Set against a backdrop of the emancipation of the serfs, touching on the (assumed) backwardness of rural Russia and the role of its elite in political reform, the book at its heart is the story of two country women asserting their independence. Kirkus Reviews

Read the book because it's a fun, smart nineteenth-century novel. Lizoks Bookshelf

A comedy this is, but a socially acute one. . . . The introduction by Hilde Hoogenboom forms a necessary complement to this rambunctious novel, well translated into English, and for the first time, by Nora Seligman Favorov. It will, it is to be hoped, form part of a reconfiguration of Russian literature to include major minor writers, many of them women. Barbara Heldt, Times Literary Supplement

Columbia University Press and translator Nora Seligman Favorov are to be congratulated on making this witty novel now available in English. A lengthy introduction explains the background of the author, Sofia Khvoshchinskaya, in terms of the changing social reforms in mid-nineteenth-century Russia. . . . The novel offers an enjoyable insight into a provincial society in turmoil between the old and the new in the early 1860s in Russia. Jean Turner, SCRSS Digest

You could easily be forgiven for never having heard of City Folk and Country Folk by Russian author Sofia Khvoshchinskaya. It’s only seeing the light of day in the English-speaking world this year, thanks to a translation by Nora Seligman Favorov, having first been published in the 1860s under a male pseudonym. Still, the timing of its arrival in translation (thanks to Columbia University Press’s Russian Library) seems felicitous. Elisabeth Cook, Education & Culture: A Critical Review

Nora Seligman Favorov’s excellent translation of City Folk and Country Folk now introduces the novel to a much broader English-speaking readership. It is a major step toward telling the untold story of these remarkable Russian sisters. Yelena Furman, Los Angeles Review of Books

A laugh-out-loud comedy of manners in the realist style that builds to a scandal scene reminiscent of Gogol or Dostoevsky. Khvoshchinskaya is indebted to Alexander Pushkin, Nikolai Gogol, and Ivan Turgenev, but her work provides a woman’s perspective on genteel life that revitalizes the canonical Russian rural society novel. . . . Nora Seligman Favorov’s skilful translation is bright and smooth, capably capturing the work’s wonderful humour. Katherine Bowers, Literature and Translation

City Folk and Country Folk was an absolutely marvellous read; entertaining, funny, thought-provoking and criminally overlooked until now. . . . Even if you know little about Russia, you’ll enjoy this one for its sparkling satire, its sharp and feisty heroine and its wonderful comedy of manners – highly recommended! Karen Langley, Shiny New Books

City Folk and Country Folk delights in slightly sarcastic sketches of its protagonists, from Ovcharov to the penny-pinching Katerina Petrovna Repekhova-Dolgovskaya (a woman who has a vested interest in forcing Olenka into an unwanted marriage) and even the local priest, who tries to avoid giving sermons so as not to upset people. Kvoshchinskaya is also expert at creating memorable scenes. Tony's Reading List

Bringing Khvoshchinskaya into the English-reading world’s understanding of 19th century Russian literature adds a new perspective to one of the most well-respected boys’ clubs in the field. Bridey Heing, Book Marks

From the first page of this revelation of a novel we know it is not going to be like any other nineteenth century Russian tale we have read. Central to this is the writer’s superb voice – light, mocking of authority and conventional wisdom, yet patiently understanding of the characters’ foibles and flaws. . . . An introduction to the work by Hilden Hoogenboom provides invaluable context and data to the novel, for instance that 16 percent of Russia’s productive writers in 1880 were women. Russian Life

A highly readable addition to nineteenth-century Russian literature in translation, one that highlights the female experience and female concerns, with an emphasis on the importance and empowerment of its female characters. . . . City Folk and Country Folk will of course be of interest to scholars studying Russian women’s writing and nineteenth-century prose, but it could also be an excellent addition to a survey course on Russian literature in translation: Its quick style and comparatively upbeat plot seem likely to appeal to college students, and could also be recommended to anyone wishing to read 'the Russians' but who is intimidated by the big names and their sprawling plots. Elena Pedigo Clark, Slavic and East European Journal

Favorov renders the narrator’s understated irony and the characters’ different intonations with such ease and grace, and the writing is so natural, that if it were not for the foreign names, it would never occur to the readers that they are dealing with a translation. This book can be profitably included in surveys of nineteenth-century Russian literature, in history courses on the period, and in courses on female authors, while also being of great interest to general readers. Tulsa Studies in Women's Literature

Talk about buried treasure! The heroines of this sly, engrossing novel crackle with a verve so fresh that 1860s Russia feels close enough to touch. A brilliant reminder (as if any were needed) that women have been fighting, and triumphing over, their conditions forever. Reviving this forgotten book is a masterstroke. Kate Bolick, author of the New York Times best-seller Spinster: Making a Life of One’s Own

A single man of property comes to a country village—unsettling young and older ladies. The village is in Russia, soon after the emancipation of the serfs; Ovcharov is a hypochondriac intellectual. “A comical people,” he reflects at one point, and the women and the reader must agree. Admirers of Jane Austen will delight in this charming satire. Rachel Brownstein, author of Why Jane Austen?

City Folk and Country Folk is reasonably priced and represents a fine choice for scholars and students of Russian history, women and women writers, literary genre, and the Russian novel. Romy Taylor, The Russian Review

Sofia Khvoshchinskaya (1824–1865), a writer, translator, and painter, published fiction and social commentary in Russia's most influential journals. She and her sister Nadezhda wrote to support their family, struggling members of the nobility, alternating long stretches of toil in their native Ryazan Province with visits to Russia's capitals, where they interacted with some of the country's leading intellectuals.

Nora Seligman Favorov is a translator of Russian literature, poetry, and history.