From Antiquity to the Tang Dynasty 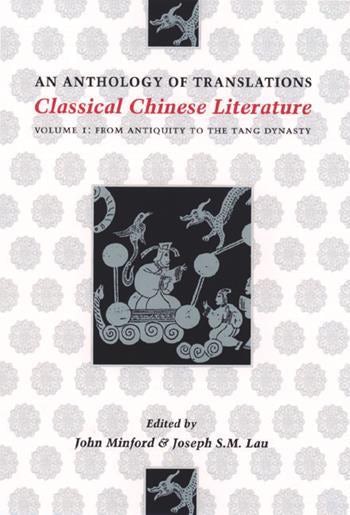 From Antiquity to the Tang Dynasty

The summation of more than two thousand years of one of the world's most august literary traditions, this volume also represents the achievements of four hundred years of Western scholarship on China. The selections include poetry, drama, fiction, songs, biographies, and works of early Chinese philosophy and history rendered in English by the most renowned translators of classical Chinese literature: Arthur Waley, Ezra Pound, David Hawkes, James Legge, Burton Watson, Stephen Owen, Cyril Birch, A. C. Graham, Witter Bynner, Kenneth Rexroth, and others.

Arranged chronologically and by genre, each chapter is introduced by definitive quotes and brief introductions chosen from classic Western sinological treatises. Beginning with discussions of the origins of the Chinese writing system and selections from the earliest "genre" of Chinese literature—the Oracle Bone inscriptions—the book then proceeds with selections from:

 the earliest anthology of Chinese poetry, the Book of Songs;

 early narrative and philosophy, including the I Ching, Tao-te Ching, and the Analects of Confucius;

 the court poetry of the Southern Dynasties;

 the finest gems of Tang poetry; and

 lyrics, stories, and tales of the Sui, Tang, and Five Dynasties eras.

Special highlights include individual chapters covering each of the luminaries of Tang poetry: Wang Wei, Li Bo, Du Fu, and Bo Juyi; early literary criticism; women poets from the first to the tenth century C.E.; and the poetry of Zen and the Tao.

An invaluable treasure... by far the most complete, with an astounding number of selections.... Highly recommended for students and scholars of Chinese literature at all levels. Choice

This book is a scholar's dream and an historical and literary marvel. Book Digest (Council On National Literatures)

Foreword, by Cyril Birch
Editors' Introduction
Part 1: Before the Han Dynasty (to 206 BC)
1. Pattern and Sign: The Chinese Language
2. Heavenly Questions: Early Myths and Legends
3. The Book of Songs: The Earliest Anthology of Chinese Poetry
4. The Source: Prose of the Ancients: Early Narrative and Philosophy
5. The Songs of the South: Shamanism and Poetry
Part 2: The Han Dynasty and the Period of Disunion
6. Red and Purple Threads: Rhapsodies from the Han and Six Dynasties
7. Mortals and Immortals: Historical and Pseudo-Historical Writings from the Han and Six Dynasties
8. We Fought South of the City Wall: Ballands and Folksongs of the Han and Six Dynasties
9. Tigers Setting the Wind Astir: Poets of the Han, Wei and Jin Dynasties
10. Bamboo Grove, Golden Valley, Orchid Pavilion: Coteries of the Third and Fourth Centuries
11. Tao Yuanming (365-427): The Gentleman of the Five Willow Trees
12. The Murmuring Stream and the Weary Road: Xie Lingyun and Bao Zhao
13. New Songs from a Jade Terrace: Court Poetry of the Southern Dynasties
14. Green Bag and Yellow Covers: A Miscellany of Prose from the Han and Six Dynasties
15. The Carving of Dragons: Early Literary Criticism
16. Spirits and Humors: Strange Tales from the Six Dynasties
Part 3: The Sui, Tang and Five Dynasties (589-960)
17. The Great River: Poets of the Early Tang
18. Wang Wei (701-761): Poet and Painter
19. Li Bo (701-762): The Banished Immortal
20. Du Fu (712-770): The Sage of Poetry
21. Spring, River, Flowers, Moon, Night: Poets of the High Tang
22. Stones Where the Haft Rotted: Poets of the Mid Tang
23. Bo Juyi (772-846): Madly Singing in the Mountains
24. The Patterned Lute: Poets of the Late Tang
25. Red Leaf: Women Poets from the First Century B.C. to the Tenth Century A.D.
26. Cold Mountain: Poetry of Zen and the Tao
27. Return to the Source: Essays of the Tang Dynasty
28. The World in a Pillow: Classical Tales of the Tang Dynasty
29. Turning the Scrolls: Ballads and Stories from Dunhuang
30. Among the Flowers: Lyrics of the Tang and Five Dynasties

Jospeph S. M. Lau is professor of translation and head of the department of Chinese at Lingnan University in Hong Kong.