Cultural Production and Language Politics in Modern Japan and Korea 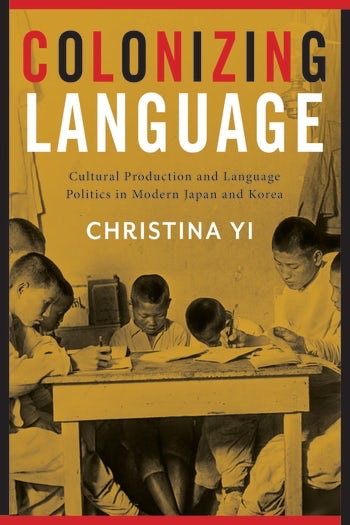 Cultural Production and Language Politics in Modern Japan and Korea

With the outbreak of the Sino-Japanese War in 1894, Japan embarked on a policy of territorial expansion that would claim Taiwan and Korea, among others. Assimilation policies led to a significant body of literature written in Japanese by colonial writers by the 1930s. After its unconditional surrender in 1945, Japan abruptly receded to a nation-state, establishing its present-day borders. Following Korea’s liberation, Korean was labeled the national language of the Korean people, and Japanese-language texts were purged from the Korean literary canon. At the same time, these texts were also excluded from the Japanese literary canon, which was reconfigured along national, rather than imperial, borders.

In Colonizing Language, Christina Yi investigates how linguistic nationalism and national identity intersect in the formation of modern literary canons through an examination of Japanese-language cultural production by Korean and Japanese writers from the 1930s through the 1950s, analyzing how key texts were produced, received, and circulated during the rise and fall of the Japanese empire. She considers a range of Japanese-language writings by Korean colonial subjects published in the 1930s and early 1940s and then traces how postwar reconstructions of ethnolinguistic nationality contributed to the creation of new literary canons in Japan and Korea, with a particular focus on writers from the Korean diasporic community in Japan. Drawing upon fiction, essays, film, literary criticism, and more, Yi challenges conventional understandings of national literature by showing how Japanese language ideology shaped colonial histories and the postcolonial present in East Asia.

A Center for Korean Research Book

Christina Yi’s fascinating book narrates the prehistory of the popular Japanese-language literary works written by ethnically Korean writers today. Yi’s careful readings show how the linguistic dilemmas faced by Japan’s colonial subjects became an inheritance that could not be simply returned despite the collapse of empire. A must-read for anyone interested in questions of postcolonialism and language. Janet Poole, University of Toronto

Christina Yi’s Colonizing Language provides a wide-ranging overview of the emergence and development of Japanese-language writings by Korean writers from the colonial through postcolonial periods. Based on meticulous archival research of Korean, Japanese, and English-language sources, and effectively weaving together historical analysis with close literary readings, it promises to be an authoritative text in the field. Sejii Lippit, University of California, Los Angeles

By probing into Japanese-language cultural productions by ethnic Koreans and diasporic Japanese across the 1945 divide, Colonizing Language reveals and deconstructs the multiple borders that have become naturalized and interiorized in the formation of national language and national literary canons in both Japan and Korea. The book is essential to our rethinking of ‘Japanese’ and ‘Korean’ languages and literatures, and its theoretical sophistication deserves an even wider appeal and application outside of East Asian studies. Jin-Kyung Lee, University of California, San Diego

Yi’s nuanced analysis of primary texts proves her prowess as a literary scholar. She expertly unearths traces of the colonial past lurking in literary texts to question the dominant idea of ‘national language’ in Japan and South Korea, which is indispensable to the equally dominant idea of the homogeneous ethnic nation in the two countries. Serk-Bae Suh, University of California, Irvine

Acknowledgments
A Note on Names, Terminology, and Translations
Introduction
1. National Language Ideology in the Age of Empire
2. “Let Me In!”: Imperialization in Metropolitan Japan
3. Envisioning a Literature of the Imperial Nation
4. Coming to Terms with the Terms of the Past
5. Colonial Legacies and the Divided “I” in Occupation-Period Japan
6. Collaboration, Wartime Responsibility, and Colonial Memory
Epilogue
Appendix: Korean Authors and Literary Critics
Notes
Selected Bibliography
Index

Christina Yi is assistant professor of modern Japanese literature at the University of British Columbia.