Essays on Literature and Religion East and West 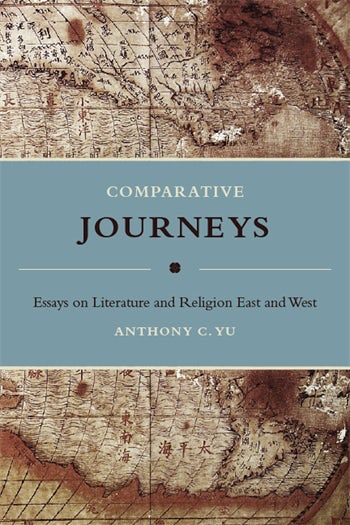 Essays on Literature and Religion East and West

Throughout his academic career, Anthony C. Yu has employed a comparative approach to literary analysis that pays careful attention to the religious and philosophical elements of Chinese and Western texts. His mastery of both canons remains unmatched in the field, and his immense knowledge of the contexts that gave rise to each tradition supplies the foundations for ideal comparative scholarship.

In these essays, Yu explores the overlap between literature and religion in Chinese and Western literature. He opens with a principal method for relating texts to religion and follows with several essays that apply this approach to single texts in discrete traditions: the Greek religion in Prometheus; Christian theology in Milton; ancient Chinese philosophical thought in Laozi; and Chinese religious syncretism in The Journey to the West.

Yu's essays juxtapose Chinese and Western textsCratylus next to Xunzi, for exampleand discuss their relationship to language and subjects, such as liberal Greek education against general education in China. He compares a specific Western text and religion to a specific Chinese text and religion. He considers the Divina Commedia in the context of Catholic theology alongside The Journey to the West as it relates to Chinese syncretism, united by the theme of pilgrimage. Yet Yu's focus isn't entirely tied to the classics. He also considers the struggle for human rights in China and how this topic relates to ancient Chinese social thought and modern notions of rights in the West.

"In virtually every high-cultural system," Yu writes, "be it the Indic, the Islamic, the Sino-Japanese, or the JudeoChristian, the literary tradition has developed in intimateindeed, often intertwining-relation to religious thought, practice, institution, and symbolism." Comparative Journeys is a major step toward unraveling this complexity, revealing through the skilled observation of texts the extraordinary intimacy between two supposedly disparate languages and cultures.

This collection of essays is highly recommended to anyone interested in understanding China and its rich cultural legacies. Zhang Longxi, Journal of Religion

The essays cover an impressive range of material, recapping Yu's long-term achievements as a leading scholar of religion and literature. Karen L. Thornber, Journal of American Academy of Religion

An original and pioneering work, it not only alerts the reader to unsuspected correlations between cultures but also, perhaps most important, outlines almost allegorically the dynamics that link the past and the present to the future. Marianna Benetatou, China Review International

Preface
Acknowledgments
1. Literature and Religion
2. New Gods and Old Order: Tragic Theology in Prometheus Bound
3. Life in the Garden: Freedom and the Image of God in Paradise Lost
4. The Order of Temptations in Paradise Regained: Implications for Christology
5. Problems and Prospects in Chinese-Western Literary Relations
6. Narrative Structure and the Problem of Chapter Nine in the Xiyouji
7. Two Literary Examples of Religious Pilgrimage: The Commedia and The Journey to the West
8. Religion and Literature in China: The "Obscure Way" of The Journey to the West
9. The Real Tripitaka Revisited: International Religion and National Politics
10. "Rest, Rest, Perturbed Spirit!": Ghosts in Traditional Chinese Prose Fiction
11. Cratylus and the Xunzi on Names
12. Reading the Daodejing: Ethics and Politics of the Rhetoric
13. Altered Accents: A Comparative View of Liberal Education
14. Readability: Religion and the Reception of Translation
15. Enduring Change: Confucianism and the Prospect of Human Rights
16. China and the Problem of Human Rights: Ancient Verities and Modern Realities
Index

Anthony C. Yu is Carl Darling Buck Distinguished Service Professor Emeritus in the Humanities and professor emeritus of religion and literature in the Divinity School at the University of Chicago. A native of Hong Kong, He received his doctorate at The University of Chicago and held concurrent faculty appointments in the departments of East Asian languages and civilizations, English, and comparative literature, and on The Committee on Social Thought. Best known for his complete, annotated translation of The Journey to the West , Yu has also published Rereading the Stone: Desire and the Making of Fiction in "Dream of the Red Chamber" and State and Religion in China: Historical and Textual Perspectives . A revised, abridged version of The Journey to the West was published in 2006 as The Monkey and the Monk .