Conspiring with the Enemy

The Ethic of Cooperation in Warfare 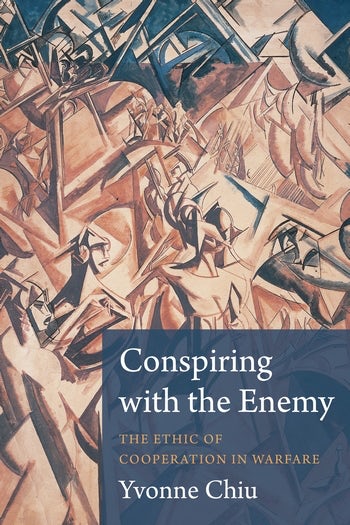 Conspiring with the Enemy

The Ethic of Cooperation in Warfare

Despite the strong influence of just war theory in military law and practice, warfare is commonly considered devoid of morality. Yet even in the most horrific of human activities, there is frequent communication and cooperation between enemies. One remarkable example is the Christmas truce—unofficial ceasefires between German and English trenches in December 1914 in which soldiers even mingled in No Man’s Land.

In Conspiring with the Enemy, Yvonne Chiu offers a new understanding of why and how enemies work together to constrain violence in warfare. Chiu argues that what she calls an ethic of cooperation is found in modern warfare to such an extent that it is often taken for granted. The importance of cooperation becomes especially clear when wartime ethics reach a gray area: To whom should the laws of war apply? Who qualifies as a combatant? Should guerrillas or terrorists receive protections? Fundamentally, Chiu shows, the norms of war rely on consensus on the existence and content of the laws of war. In a wide-ranging consideration of pivotal instances of cooperation, Chiu examines weapons bans, treatment of prisoners of war, and the Geneva Conventions, as well as the tensions between the ethic of cooperation and the pillars of just war theory. An original exploration of a crucial but overlooked phenomenon, Conspiring with the Enemy is a significant contribution to military ethics and political philosophy.

Yvonne Chiu has written an original and important book. Conspiring with the Enemy's argument is strong throughout; the writing is clear and often elegant, and the historical references, illustrations, and examples make the book engaging as well as educational. Who ever heard of such a thing as cooperation between enemies in war? Henceforth no one will ask that question. Michael Walzer, author of Just and Unjust Wars: A Moral Argument with Historical Illustrations

War is the fiercest form of human competition, yet it often involves cooperation among adversaries, even as they try to slaughter one other. Drawing on an impressive survey of military history—ancient and modern, Eastern and Western—Yvonne Chiu distinguishes among numerous forms of cooperation in war and even identifies an “ethic of cooperation” of which she finds manifestations throughout the history of warfare. Many of the instances she recounts are moving and inspiring, and the book as a whole offers grounds for optimism about the future of warfare. Jeff McMahan, University of Oxford

Chiu shows that the ethic of cooperation in warfare is a major normative feature of war-fighting, today as well as in the distant past. Other writers on just war theory sometimes drop hints of this, but the great accomplishment of this book is to bring the ethic of cooperation out of the shadows and reveal it as something absolutely central to warfare ethics. Chiu’s scholarship is impressively wide-ranging, and she has a tremendous eye for the telling anecdote, historical episode, and quotation. David Luban, Georgetown University

Conspiring with the Enemy is oriented around the question of cooperation in war and whether it is possible to have a degree of ethics in war. The author assembles her writing in a compelling and clear way. Sarah Kreps, author of Taxing Wars: The American Way of War and Finance and the Decline of Democracy