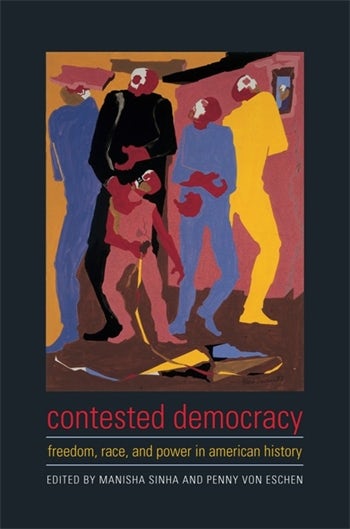 With essays on U.S. history ranging from the American Revolution to the dawn of the twenty-first century, Contested Democracy illuminates struggles waged over freedom and citizenship throughout the American past. Guided by a commitment to democratic citizenship and responsible scholarship, the contributors to this volume insist that rigorous engagement with history is essential to a vital democracy, particularly amid the current erosion of human rights and civil liberties within the United States and abroad. Emphasizing the contradictory ways in which freedom has developed within the United States and in the exercise of American power abroad, these essays probe challenges to American democracy through conflicts shaped by race, slavery, gender, citizenship, political economy, immigration, law, empire, and the idea of the nation state.

In this volume, writers demonstrate how opposition to the expansion of democracy has shaped the American tradition as much as movements for social and political change. By foregrounding those who have been marginalized in U.S society as well as the powerful, these historians and scholars argue for an alternative vision of American freedom that confronts the limitations, failings, and contradictions of U.S. power. Their work provides crucial insight into the role of the United States in this latest age of American empire and the importance of different and oppositional visions of American democracy and freedom.

At a time of intense disillusionment with U.S. politics and of increasing awareness of the costs of empire, these contributors argue that responsible historical scholarship can challenge the blatant manipulation of discourses on freedom. They call for careful and conscientious scholarship not only to illuminate contemporary problems but also to act as a bulwark against mythmaking in the service of cynical political ends.

An exceptional collection. Alexander Tsesis, The Journal of American History

Acknowledgments
Introduction, by Manisha Sinha and Penny Von Eschen
1. An Alternative Tradition of Radicalism: African American Abolitionists and the Metaphor of Revolution, by Manisha Sinha
2. Isaiah Rynders and the Ironies of Popular Democracy in Antebellum New York, by Tyler Anbinder
3. Leave of Court: African American Claims-Making in the Era of Dred Scott v. Sanford, by Martha S. Jones
4. City Women: Slavery and Resistance in Antebellum St. Louis, by Martha Saxton
5. Free Soil, Free Labor, and Free Markets: Antebellum Merchant Clerks, Industrial Statistics, and the Tautologies of Profit, by Michael Zakim
6. Make "Every Slave Free, and Every Freeman a Voter": The African American Construction of Suffrage Discourse in the Age of Emancipation, by Xi Wang
7. Making It Fit: The Federal Government, Liberal Individualism, and the American West", by Melinda Lawson
8. Reconstructing the Empire of Cotton: A Global Story, by Sven Beckert
9. Cuba Libre and American Imperial Nationalism: Conflicting Views of Racial Democracy in the Post-Reconstruction United States, by Alessandra Lorini
10. Transnational Solidarities: The Sacco and Vanzetti Case in Global Perspective, by Lisa McGirr
11. "An Ironic Testimony to the Value of American Democracy": Assimilationism and the World War II Internment of Japanese Americans, by Mae M. Ngai
12. Student Protest, "Law and Order," and the Origins of African American Studies in California, by Martha Biondi
13. Duke Ellington Plays Baghdad: Rethinking Hard and Soft Power from the Outside In, by Penny Von Eschen
14. The Story of American Freedom—Before and After 9/11, by Eric Foner
Afterword: "From the Archives and from the Heart", by David W. Blight
Notes on Contributors
Index

Manisha Sinha is associate professor of Afro-American studies and history at the University of Massachusetts, Amherst. She is author of The Counterrevolution of Slavery: Politics and Ideology in Antebellum South Carolina and, with John H. Bracey Jr., the editor of the two-volume African American Mosaic: A Documentary History from the Slave Trade to the Twenty-first Century. At present, she is working on a book on African Americans and the movement to abolish slavery between 1775 and 1865.

Penny Von Eschen is professor of history and American culture at the University of Michigan. She is the author of Race Against Empire: Black Americans and Anticolonialism, 1937-1957 and Satchmo Blows Up the World: Jazz Ambassadors Play the Cold War. She is currently working on a transnational history of Cold War memory, as well as a study of the global circulation of American culture in the post-World War II era.