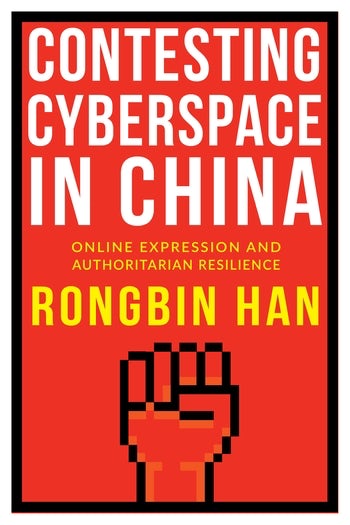 The Internet was supposed to be an antidote to authoritarianism. It can enable citizens to express themselves freely and organize outside state control. Yet while online activity has helped challenge authoritarian rule in some cases, other regimes have endured: no movement comparable to the Arab Spring has arisen in China. In Contesting Cyberspace in China, Rongbin Han offers a powerful counterintuitive explanation for the survival of the world’s largest authoritarian regime in the digital age.

Han reveals the complex internal dynamics of online expression in China, showing how the state, service providers, and netizens negotiate the limits of discourse. He finds that state censorship has conditioned online expression, yet has failed to bring it under control. However, Han also finds that freer expression may work to the advantage of the regime because its critics are not the only ones empowered: the Internet has proved less threatening than expected due to the multiplicity of beliefs, identities, and values online. State-sponsored and spontaneous pro-government commenters have turned out to be a major presence on the Chinese internet, denigrating dissenters and barraging oppositional voices. Han explores the recruitment, training, and behavior of hired commenters, the “fifty-cent army,” as well as group identity formation among nationalistic Internet posters who see themselves as patriots defending China against online saboteurs. Drawing on a rich set of data collected through interviews, participant observation, and long-term online ethnography, as well as official reports and state directives, Contesting Cyberspace in China interrogates our assumptions about authoritarian resilience and the democratizing power of the Internet.

If you are looking for that long-awaited book on China’s Internet censorship, look no further. Rongbin Han’s Contesting Cyberspace in China illuminates the labyrinths of that proverbial cat-and-mouse game with clarity and sophistication. It will be a thought-provoking and rewarding read. Guobin Yang, University of Pennsylvania

How has the Internet changed state-society relations in China? How have social groups engaged in a “guerrilla war” with the authorities over cyberspace? And how is the Internet remaking China? In this empirically rich work, Rongbin Han has provided us with a vivid analysis of the interactions between the state and society in China’s cyberspace. Those who are interested in cyber affairs must read this brilliant book. Zheng Yongnian, National University of Singapore

Contesting Cyberspace in China goes beyond the typical fascination with Chinese censorship and internet controls. It investigates the ways in which social media and online expression are pluralizing political debate in China, giving ample room for fiery nationalists and indignant leftists to attack the regime’s liberal critics. The book is an excellent study of the diversity, drama, and defiance of China’s netizens. Mary E. Gallagher, University of Michigan

Han provides a well-written and comprehensive study on Internet censorship and online discourse in China and breaks down the assumption that the Internet is inherently regime challenging. John James Kennedy, Journal of Asian Studies

Rongbin Han is an assistant professor in the Department of International Affairs at the University of Georgia.