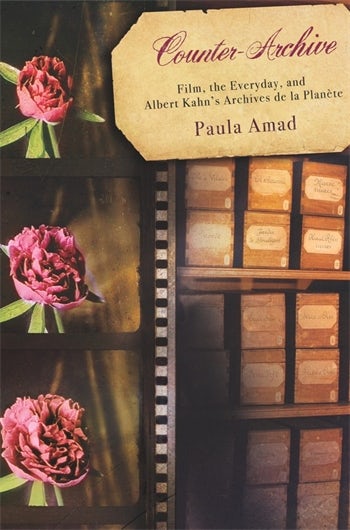 Tucked away in a garden on the edge of Paris is a multimedia archive like no other: Albert Kahn's Archives de la Planète (1908-1931). Kahn's vast photo-cinematographic experiment preserved world memory through the privileged lens of everyday life, and Counter-Archive situates this project in its biographic, intellectual, and cinematic contexts. Tracing the archive's key influences, such as the philosopher Henri Bergson, the geographer Jean Brunhes, and the biologist Jean Comandon, Paula Amad maps an alternative landscape of French cultural modernity in which vitalist philosophy cross-pollinated with early film theory, documentary film with the avant-garde, cinematic models of temporality with the early Annales school of history, and film's appropriation of the planet with human geography and colonial ideology. At the heart of the book is an insightful meditation upon the transformed concept of the archive in the age of cinema and an innovative argument about film's counter-archival challenge to history. The first comprehensive study of Kahn's films, Counter-Archive also offers a vital historical perspective on debates involving archives, media, and memory.

Counter-Archive is a groundbreaking, original and scholarly book, which is indispensable to a full understanding of the early and present history of the cinema and its relationship to the archive and the everyday. Barbara Creed, H-France

...rich and endearing study... Lisabeth During and Deborah Levitt, Years Work in Critical and Cultural Theory

List of Illustrations
Acknowledgments
List of Abbreviations
Introduction
1. World Souvenir: "Mr. K" and the Archives de la Planète
2. "Keep your eyes open": From Pre-documentary to Documentary Film in the Kahn Archive
3. The Counter-Archive of Cinematic Memory: Bergsonism, la durée, and the Everyday
4. "No more written archives, only films": Early Discourses and Practices of the Film Archive
5. The "anecdotal side of history": Temporality, Film, and Annales Historiography
6. Seeing "for the first time": The Rediscovery of the Everyday in Early French Film Theory
7. Illuminations from the Darkened "Sanctuary": Reception of the Kahn Films
8. The Aerial View: Human Geography, Cosmopolitanism, and Colonialism
Conclusion: Toute la Mémoire du monde: The Counter-Archive Beyond Kahn
Appendix: Photographers and Cameramen of the Archives de la Planète
Notes
Bibliography
Index

Paula Amad is an Australian-born Lebanese academic and Associate Professor of cinema and comparative literature at the University of Iowa. She has taught at universities in Australia, France, and the United States and is the recipient of a J. Paul Getty Postdoctoral Fellowship.