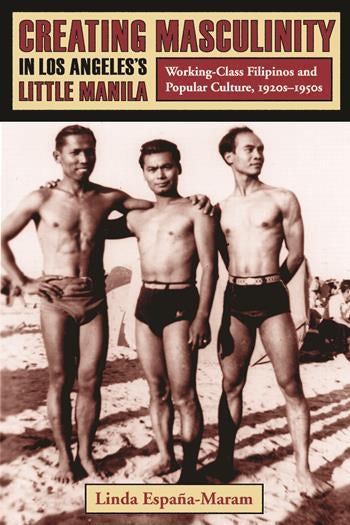 In this new work, Linda España-Maram analyzes the politics of popular culture in the lives of Filipino laborers in Los Angeles's Little Manila, from the 1920s to the 1940s. The Filipinos' participation in leisure activities, including the thrills of Chinatown's gambling dens, boxing matches, and the sensual pleasures of dancing with white women in taxi dance halls sent legislators, reformers, and police forces scurrying to contain public displays of Filipino virility. But as España-Maram argues, Filipino workers, by flaunting "improper" behavior, established niches of autonomy where they could defy racist attitudes and shape an immigrant identity based on youth, ethnicity, and notions of heterosexual masculinity within the confines of a working class.

España-Maram takes this history one step further by examining the relationships among Filipinos and other Angelenos of color, including the Chinese, Mexican Americans, and African Americans. Drawing on oral histories and previously untapped archival records, España-Maram provides an innovative and engaging perspective on Filipino immigrant experiences.

This book gives us a look into the lost world of Filipino American urban cultural creativity... an absorbing and exciting book. Dawn B. Mabalon, H-Net

Acknowledgments
Introduction: Filipino Immigration to California and the Contours of Filipino Immigrant Studies
1. Making a Living: The Meanings of Work and the Struggles for Solidarity
2. Of Dice and Men: Inter-Asian Relations and the Ethnic Vice Industry in Chinatown
3. From the "Living Doll" to the "Bolo Puncher": Prizefighting, Masculinity, and the Sporting Life
4. "White Trash" and "Brown Hordes": Taxi Dance Halls and the Policing of Working-Class Bodies
5. The War Years: Identity Politics at the Crossroads of Spectacle, Excess, and Combat
6. Reformulating Communities: Filipino Los Angeles Since World War II
Notes
Bibliography
Index