Days of Death, Days of Life

Ritual in the Popular Culture of Oaxaca 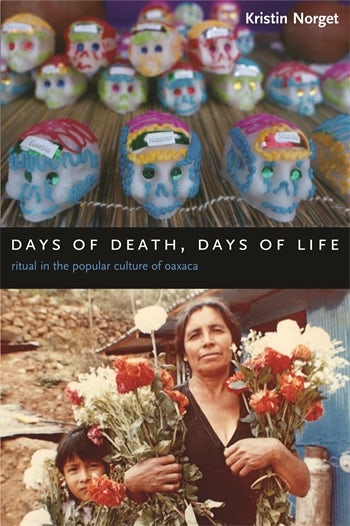 Days of Death, Days of Life

Ritual in the Popular Culture of Oaxaca

Kristin Norget explores the practice and meanings of death rituals in poor urban neighborhoods on the outskirts of the southern Mexican city of Oaxaca. Drawing on her extensive fieldwork in Oaxaca City, Norget provides vivid descriptions of the Day of the Dead and other popular religious practices. She analyzes how the rites and beliefs associated with death shape and reflect poor Oaxacans' values and social identity.

Norget also considers the intimate relationship that is perceived to exist between the living and the dead in Oaxacan popular culture. She argues that popular death rituals, which lie largely outside the sanctioned practices of the Catholic Church, establish and reinforce an ethical view of the world in which the dead remain with the living and in which the poor (as opposed to the privileged classes) do right by one another and their dead. For poor Oaxacans, these rituals affirm a set of social beliefs and practices, based on fairness, egalitarianism, and inclusiveness.

Norget's book should find a welcomed place on many of our shelves. Jeffrey H. Cohen, Journal of Anthropological Research

Will be useful to scholars... [while] still perfectly appropriate for the lay reader. Juanita Garciagodoy, Journal of Religion

Kristin Norget is associate professor of anthropology at McGill University.