Death of a Discipline 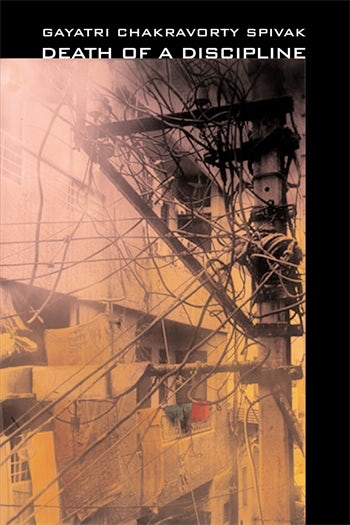 Death of a Discipline

For almost three decades, Gayatri Chakravorty Spivak has been ignoring the standardized "rules" of the academy and trespassing across disciplinary boundaries. Today she remains one of the foremost figures in the study of world literature and its cultural consequences. In this new book she declares the death of comparative literature as we know it and sounds an urgent call for a "new comparative literature," in which the discipline is given new life—one that is not appropriated and determined by the market.

In the era of globalization, when mammoth projects of world literature in translation are being undertaken in the United States, how can we protect the multiplicity of languages and literatures at the university? Spivak demonstrates how critics interested in social justice should pay close attention to literary form and offers new interpretations of classics such as Joseph Conrad's Heart of Darkness and Virginia Woolf's A Room of One's Own. Through close readings of texts not only in English, French, and German but also in Arabic and Bengali, Spivak practices what she preaches.

Acclaim for Gayatri Chakravorty Spivak and her work:

"She has probably done more long-term political good, in pioneering feminist and post-colonial studies within global academia, than almost any of her theoretical colleagues." —Terry Eagleton

"A celebrity in academia... create[s] a stir wherever she goes." —The New York Times

Death of a Discipline is a visionary text which can be considered one of the most cutting-edge theoretical works today. Studies in Ethnicity and Nationalism

This thought-provoking slim book is written in an eclectic style... We have been on a planetary tour, which makes us rethink human collectivity across borders—thanks to Spivak. Ferial J. Ghazoul, H-Gender-Mideast

Death of a Discipline is certainly the most important, sustained statement about the discipline of Comparative Literature to have appeared in English since Charles Bernheimer's 1995 report. John Mowitt, CLIO

One of the obligatory books of this decade for comparatists... One of the most passionate defenses... of Comparative Literature. Roland Greene, SubStance

Gayatri Chakravorty Spivak is the Avalon Foundation Professor in the Humanities at Columbia University. She is the author of Myself I Must Remake; In Other Worlds: Essays in Cultural Politics; The Post-Colonial Critic: Interviews, Strategies, Dialogues; Outside in the Teaching Machine; and A Critique of Postcolonial Reason: Toward a History of the Vanishing Present. She is the translator of Jacques Derrida's Of Grammatology and Mahasweta Devi'sImaginary Maps, Breast Stories, Old Women, and Chotti Munda and his Arrow.