The Deep Battle Against America 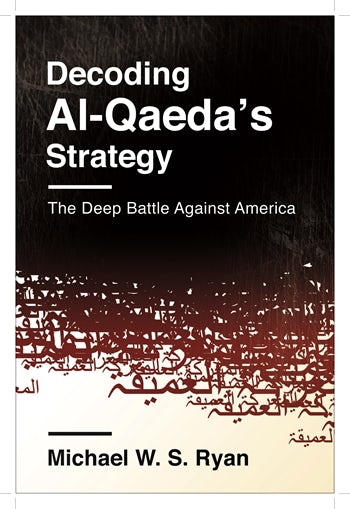 The Deep Battle Against America

By consulting the work of well-known and obscure al-Qaeda theoreticians, Michael W. S. Ryan finds jihadist terrorism strategy has more in common with the principles of Maoist guerrilla warfare than mainstream Islam. Encouraging strategists and researchers to devote greater attention to jihadi ideas rather than jihadist military operations, Ryan builds an effective framework for analyzing al-Qaeda's plans against America and constructs a compelling counternarrative to the West's supposed "war on Islam."

Ryan examines the Salafist roots of al-Qaeda ideology and the contributions of its most famous founders, Osama Bin Laden and Ayman al-Zawahiri, in a political-military context. He also reads the Arabic-language works of lesser known theoreticians who have played an instrumental role in framing al-Qaeda's so-called war of the oppressed. These authors readily cite the guerrilla strategies of Mao, Che Guevara, and the mastermind of the Vietnam War, General Giap. They also incorporate the arguments of American theorists writing on "fourth-generation warfare."

Through these texts, readers experience events as insiders see them, and by concentrating on the activities and pronouncements of al-Qaeda's thought leaders, especially in Yemen, they discern the direct link between al-Qaeda's tactics and trends in anti-U.S. terrorism. Ryan shows al-Qaeda's political-military strategy to be a revolutionary and largely secular departure from the classic Muslim conception of jihad, adding invaluable dimensions to the operational, psychological, and informational strategies already deployed by America's military in the region.

Michael W. S. Ryan's illumination of the ideology and strategy of al-Qaeda as seen in the writings of its key theoreticians is unique and valuable. This is an important and insightful book that provides both new information on al-Qaeda and new commentary on its strategy and how to defeat it. Bruce Riedel, senior fellow at the Brookings Institution

Osama bin Laden is dead, al-Qaeda 'prime' in Pakistan is decimated, and yet the anti-Western jihad continues as extremism erupts in Yemen, Libya, Syria, Algeria, and elsewhere. Unless we can match our tactical successes with strategic progress, we seem condemned to endless war. Thankfully, Ryan shows us a way forward in his thoughtful, non-polemic analysis of this enemy's doctrine and motivation—the essential first step in combating not just its actions but also its ideas. This book is a blueprint for taking our fight to the next level. General Michael Hayden, former director of the CIA

Knowledge of the enemy is essential in any conflict, and Ryan delivers. His analysis of al-Qaeda's theology, strategy, tactics, and ability to marshal support even among people who disapprove of its methods is timely, well written,deeply researched, and ultimately reassuring. Thomas W. Lippman, author of Saudi Arabia on the Edge

An outstanding and unique contribution that examines al-Qaeda's strategy against the US.... Highly recommended. Choice

Note on Transliteration
Acknowledgments
Introduction
1. The Historical Roots of al-Qaeda's Ideology
2. The Leadership Inspires a New Strategy
3. Jihad as Revolution
4. An Action Plan for Savagery
5. The Jihadist Legacy of Abu Mus'ab al-Suri
Conclusion: What It All Means
Appendix 1: Translation of "Revolutionary Wars"
Appendix 2: Translation of "Fourth-Generation Warfare"
Notes
Bibliography
Index

Michael W. S. Ryan, a senior fellow at the Jamestown Foundation, studied Arabic in Egypt and received his Ph.D. from Harvard University. He served as a senior executive in the U.S. Departments of State and Defense and as vice president of the Millennium Challenge Corporation and the Middle East Institute. He lives in Virginia.