Novel and Nation in Twenty-First-Century France 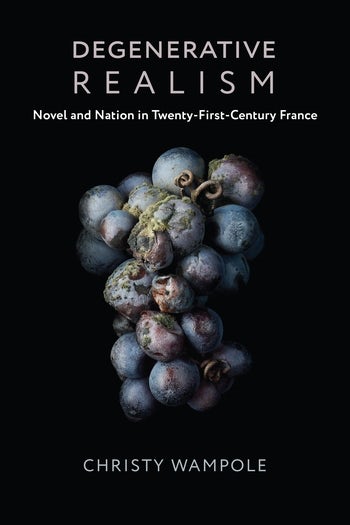 Novel and Nation in Twenty-First-Century France

A new strain of realism has arisen in France. Novels that contain it represent diverse fears—immigration and demographic change, radical Islam, feminism, new technologies, globalization, American capitalism, and the European Union—but these books, often best-sellers, share crucial affinities. In their dystopian visions, the collapse of France, Europe, and Western civilization is portrayed as all but certain and the literary mode of realism begins to break down. Above all, they depict a degenerative force whose effects on the nation and on reality itself can be felt.

Examining key novels by Michel Houellebecq, Frédéric Beigbeder, Aurélien Bellanger, Yann Moix, and other French writers, Christy Wampole identifies and critiques this emergent tendency toward “degenerative realism.” She considers the ways these writers draw on social science, the New Journalism of the 1960s, political pamphlets, reportage, and social media to construct an atmosphere of disintegration and decline. Wampole maps how degenerative realist novels explore a world contaminated by conspiracy theories, mysticism, and misinformation, responding to the internet age’s confusion between fact and fiction with a lament for the loss of the real and an unrelenting emphasis on the role of the media in crafting reality. In a time of widespread populist anxieties over the perceived decline of the French nation, this book diagnoses the literary symptoms of today’s reactionary revival.

This book is timely in its intervention, and it offers a bracing portrait of the new degenerative realists. Wampole makes a persuasive case for the coherence and significance of this reactionary literary tendency. Lee Konstantinou, University of Maryland

Christy Wampole is associate professor of French at Princeton University. She is the author of Rootedness: The Ramifications of a Metaphor (2016) and The Other Serious: Essays for the New American Generation (2015).