Democracy in What State? 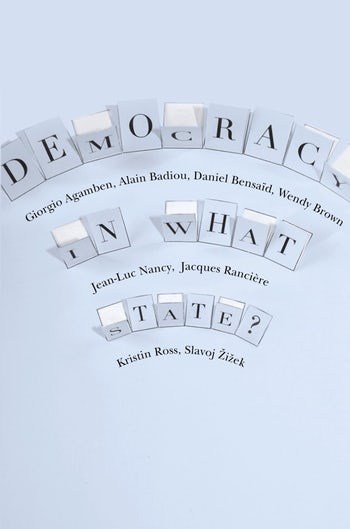 Democracy in What State?

"Is it meaningful to call oneself a democrat? And if so, how do you interpret the word?"

In responding to this question, eight iconoclastic thinkers prove the rich potential of democracy, along with its critical weaknesses, and reconceive the practice to accommodate new political and cultural realities. Giorgio Agamben traces the tense history of constitutions and their coexistence with various governments. Alain Badiou contrasts current democratic practice with democratic communism. Daniel Bensaid ponders the institutionalization of democracy, while Wendy Brown discusses the democratization of society under neoliberalism. Jean-Luc Nancy measures the difference between democracy as a form of rule and as a human end, and Jacques Rancière highlights its egalitarian nature. Kristin Ross identifies hierarchical relationships within democratic practice, and Slavoj Zizek complicates the distinction between those who desire to own the state and those who wish to do without it.

Concentrating on the classical roots of democracy and its changing meaning over time and within different contexts, these essays uniquely defend what is left of the left-wing tradition after the fall of Soviet communism. They confront disincentives to active democratic participation that have caused voter turnout to decline in western countries, and they address electoral indifference by invoking and reviving the tradition of citizen involvement. Passionately written and theoretically rich, this collection speaks to all facets of modern political and democratic debate.

Democracy in What State? is timely, represents a wide variety of thinkers, and displays the political themes that are of concern to these thinkers. This allows the reader not only to have access to a general progressive critique of current political practice but also to compare different approaches to progressive thought and action, particularly (although not exclusively) in the contemporary French scene. If I saw it on a bookstore shelf, I would undoubtedly reach for it with one hand while reaching for my wallet with the other. Todd May, Class of 1941 Memorial Professor of the Humanities, Clemson University

A timely and thought-provoking collection that shows that radical thinking and the politics of dissent are more than ever necessary in order to create a different kind of politics. Perhaps what most makes this book admirable is its attempt to start the dialogue that will rattle the sacrosanct cage of liberal democratic thinking. Marx and Philosophy Review of Books

The slim but hugely incisive volume, Democracy in What State?, in which well-known intellectuals articulate their radical critique of the democratic theory, its philosophical impasse and its logical conundrums, provides a convenient access to the current debate on democratic theory and its discontents. Muslim World Book Review

Foreword by the French Publisher
Translator's Note
Introductory Note on the Concept of Democracy, by Giorgio Agamben
The Democratic Emblem, by Alain Badiou
Permanent Scandal, by Daniel Bensaïd
"We Are All Democrats Now. . . ", by Wendy Brown
Finite and Infinite Democracy, by Jean-Luc Nancy
Democracies Against Democracy, by Jacques Rancière
Democracy for Sale, by Kristin Ross
From Democracy to Divine Violence, by Slavoj Zizek
Authors

Alain Badiou (Author)
Alain Badiou (PhD, Philosophy, Ecole Normale Superieure) holds the Rene Descartes Chair at the European Graduate School; he also teaches at the Ecole Normale Superieure and the College International de Philosophie in Paris. He is the author of several successful novels and plays as well as more than a dozen philosophical works, including his masterwork, Being and Event (Continuum, 2007), and several Columbia titles, includng Plato's Republic (2013) and Jacques Lacan Past and Present (2016).

Slavoj Žižek (Author)
Slavoj Žižek (PhD, Philosophy, Ljubljana) is Senior Researcher at the Institute for Sociology and Philosophy at the University of Ljubljana, Global Distinguished Professor of German at New York University, and International Director of the Birkbeck Institute for the Humanities at the University of London. An internationally renowned psychoanalytic philosopher, cultural critic, and Hegelian Marxist, he is the author of numerous books, including Less than Nothing: Hegel and the Shadow of Dialectical Materialism (Verso, 2012) and Absolute Recoil: Towards a New Foundation of Dialectical Materialism (Verso, 2014).