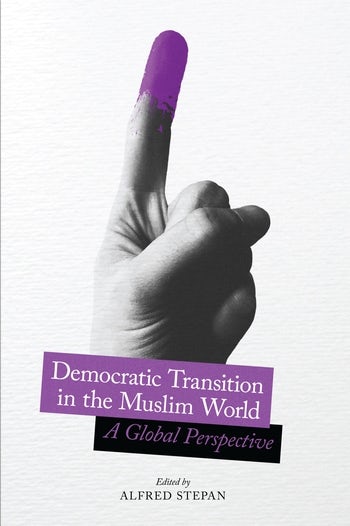 In early 2011, widespread protests ousted dictatorial regimes in both Tunisia and Egypt. Within a few years, Tunisia successfully held parliamentary and presidential elections and witnessed a peaceful transition of power, while the Egyptian military went on to seize power and institute authoritarian control. What explains the success and failure of transitions to democracy in these two countries, and how might they speak to democratic transition attempts in other Muslim-majority countries?

Democratic Transition in the Muslim World convenes leading scholars to consider the implications of democratic success in Tunisia and failure in Egypt in comparative perspective. Alongside case studies of Indonesia, Senegal, and India, contributors analyze similarities and differences among democratizing countries with large Muslim populations, considering universal challenges as well as each nation’s particular obstacles. A central theme is the need to understand the conditions under which it becomes possible to craft pro-democratic coalitions among secularists and Islamists. Essays discuss the dynamics of secularist fears of Islamist electoral success, the role of secular constituencies in authoritarian regimes’ resilience, and the prospects for moderation among both secularist and Islamist political actors. They delve into topics such as the role of the army and foreign military aid, Middle Eastern constitutions, and the role of the Muslim Brotherhood. The book also includes an essay by the founder and president of Tunisia’s Ennadha Party, Rachid Ghannouchi, who discusses the political strategies his party chose to pursue.

In the age of ISIS and growing anti-Muslim bigotry embodied in the rise of Donald Trump, the claim that Islam and Muslim societies are essentially and enduringly antidemocratic has again become mainstream. This book forcefully and convincingly repudiates this proposition. Focusing on the fascinating case of Tunisia and drawing up his vast erudition on the study of democracy, Alfred Stepan makes an important and unique contribution in understanding the relationship between religion and democracy in Muslim societies. Nader Hashemi, the University of Denver

Al Stepan was our leading theorist of how to get and keep democracy around the world. His work on the Middle East revealed great subtlety and depth of understanding, made all the more remarkable by the fact that his primary region of study was Latin America. This carefully curated volume demonstrates the influence that Stepan’s thinking has had (and will have) on generations of Middle East scholars. Tarek Masoud, John F. Kennedy School of Government, Harvard University

Al Stepan was a giant in the field of comparative politics. His contributions to our understanding of the complicated processes of liberalization and democratization are unrivaled. The invaluable essays contained in this volume reflect Stepan’s broad intellectual range and his rich legacy as a teacher to a generation of scholars. Steven A. Cook, Eni Enrico Mattei Senior Fellow for Middle East and Africa Studies, Council on Foreign Relations

Foreword by Monica Marks
Acknowledgments
Introduction by Alfred Stepan
Part I. Why Different Democratization Outcomes in Tunisia and Egypt? Cross-Ideological Accommodations, Constitutions, Militaries, and the Content of International Assistance
1. Ennahda’s Democratic Commitments and Capabilities: Major Evolutionary Moments and Choices, by Rached Ghannouchi
2. The Challenges of Democratization in the Arab World: Some Reflections on the Egyptian Case, by Carrie Rosefsky Wickham
3. Mutual Accommodation: Islamic and Secular Parties and Tunisia’s Democratic Transition, by Alfred Stepan
4. The Roots of Egypt’s Constitutional Catastrophe: The Necessity of Marrying an Analysis of Context, Process, and Text, by Nathan J. Brown
5. Purists and Pluralists: Cross-Ideological Coalition Building in Tunisia’s Democratic Transition, by Monica Marks
6. Patterns of Civil-Military Relations and Their Legacies for Democratization: Egypt Versus Tunisia, by Hicham Bou Nassif
7. The Failure of the International Community to Support Tunisia, by Radwan Masmoudi
Part II. Rethinking Other Democracies with Large Muslim Populations: What Policies Helped in Indonesia and India?
8. Crafting Indonesian Democracy: Inclusion-Moderation and the Sacralizing of the Postcolonial State, by Jeremy Menchik
9. Indian Democracy and the World’s Largest Muslim Minority, by Hilal Ahmed and Sudipta Kaviraj
Selected Bibliography
Contributors
Index

Alfred Stepan (1936–2017) was the Wallace S. Sayre Professor Emeritus of Government and founding director of the Center for the Study of Democracy, Toleration, and Religion at Columbia University. His many books include Problems of Democratic Transition and Consolidation: Southern Europe, South America, and Post-Communist Europe (with Juan J. Linz, 1996); Arguing Comparative Politics (2001); and Boundaries of Toleration (Columbia, 2014, with Charles Taylor).