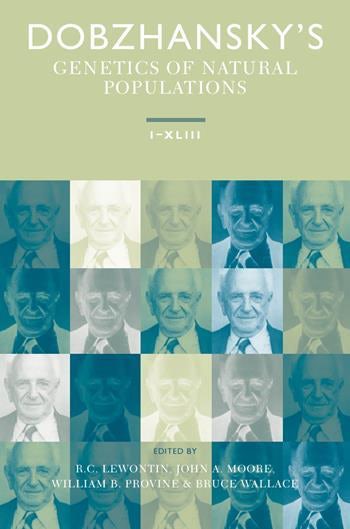 Nothing in biology makes sense except in the light of evolution. This statement is an apt motto for the lifework of Theodosius Dobzhansky, whom Stephen Jay Gould has called "the greatest evolutionary geneticist of our times." Between 1937 and 1975, the year of his death, Dobzhansky and twenty-two of his collaborators published forty-three papers in a series called "The Genetics of Natural Populations." Taken as a whole, the series is perhaps the most important single corpus in modern evolutionary genetics.

Dobzhansky's Genetics of Natural Populations, I-XLIII reproduces these forty-three articles. Because three of the four editor's of this volume are former students and long-time collaborators of Dobzhansky, they are able to set these important papers in critical perspective. The editors briefly evaluate the totality of Dobzhansky's work and summarize the views expressed in the series—including the historic development of Dobzhansky's ideas on genetic variation. Critical comments illuminate the relationship of the papers to each other and to Dobzhansky's other work. In addition, the editors discuss the role of Dobzhansky's interaction with Alfred Sturtevant and Sewall Wright.

In particular, the book features Dobzhansky's pioneering field studies of Drosophila pseudoobscura, which were critical in the formulation of some of his most important conclusions about the genetic structure of populations and, more broadly, about the way evolution works.

John A. Moore is emeritus professor of biology at the University of California, Riverside.

William B. Provine is professor of history at Harvard University.

Bruce Wallace is professor of biology at the Virginia Polytechnic Institute.