The Making of Status Hierarchies in an Elite Profession 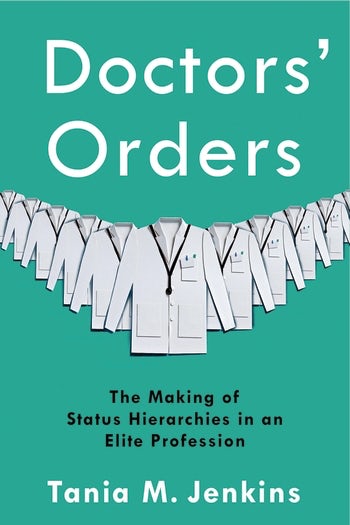 The Making of Status Hierarchies in an Elite Profession

Doctors’ Orders offers a groundbreaking examination of the construction and consequences of status distinctions between physicians before, during, and after residency training. Tania M. Jenkins spent years observing and interviewing American, international, and osteopathic medical residents in two hospitals to reveal the unspoken mechanisms that are taken for granted and that lead to hierarchies among supposed equals. She finds that the United States does not need formal policies to prioritize American-trained MDs. By relying on a system of informal beliefs and practices that equate status with merit and eclipse structural disadvantages, the profession convinces international and osteopathic graduates to participate in a system that subordinates them to American-trained MDs. Offering a rare ethnographic look at the inner workings of an elite profession, Doctors’ Orders sheds new light on the formation of informal status hierarchies and their significance for both doctors and patients.

Doctors' Orders adds essential insights to our understanding of both status and elites. This empirically rich comparative study shows how the medical profession conceptualizes itself as rewarding talent, all the while structurally organizing itself to reproduce inequalities. These are important insights for understanding the medical profession, and they extend well beyond, to a general understanding of how stratification works in America. Shamus Khan, coauthor of Sexual Citizens: A Landmark Study of Sex, Power, and Assault on Campus and Privilege: The Making of an Adolescent Elite at St. Paul's School

An important reminder that inequality exists everywhere, even within the medical profession. A major contribution to our understanding status hierarchies within medicine and their impact on patient care. Charles L. Bosk, author of Forgive and Remember: Managing Medical Failure

Doctors' Orders is an insightful examination of the forces that drive status inequality in medicine. I recommend it for anyone interested in how the U.S. medical residency system really works. Sandeep Jauhar, author of Intern: A Doctor’s Initiation

Doctors' Orders reveals stark divides in the experiences of medical school students and graduates in the United States based on degree type and nationality. Jenkins' fascinating ethnographic study shows how concerns about status at the individual and institutional levels pervade the selection and training of doctors and reproduce inequalities within the medical profession. The findings, however, transcend medicine, illuminating how taken-for-granted assumptions about the link between educational prestige and individual merit shape career outcomes among US professionals. The book is a must-read for scholars interested in medical sociology and the sociology of professions as well as practitioners. Lauren A. Rivera, author of Pedigree: How Elite Students Get Elite Jobs

Doctors’ Orders sheds light on an area of medical sociology that is important but not terribly well understood. Jenkins's book is well written, insightful, and compelling. Its contribution will endure. Jason Schnittker, author of The Diagnostic System: Why the Classification of Psychiatric Disorders Is Necessary, Difficult, and Never Settled

With verve and an ethnographic sensibility, Jenkins explores how the medical profession informally sorts its members into elites and an underclass. Rather than merit, structural and institutional factors determine sharply diverging career paths. In this gripping but disturbing book, medical socialization meets social inequities along class, race, and nativist lines. An absolute must read. Stefan Timmermans, author of Postmortem: How Medical Examiners Explain Suspicious Deaths

Tania M. Jenkins is assistant professor of sociology at the University of North Carolina at Chapel Hill.