Down the Asphalt Path

The Automobile and the American City 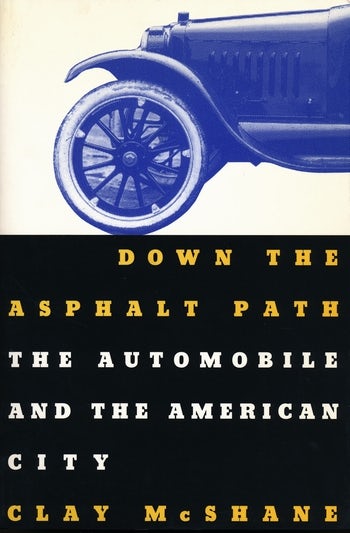 Down the Asphalt Path

The Automobile and the American City

Imagine a world without automobiles, traffic lights, and interstate highways. Or the words commuter and parking. For a nation that prides itself on the freedom of movement and the long weekend, this seems nearly impossible.

In Down the Asphalt Path, Clay McShane examines the uniquely American relation between automobility and urbanization. Writing at the cutting edge of urban and technological history, McShane focuses on how new transportation systems—most important, the private automobile—and new concepts of the city redefined each other in modern America. We swiftly motor across the country from Boston to New York to Milwaukee to Los Angeles and the suburbs in between as McShane chronicles the urban embrace of the automobile.

McShane begins with mid-nineteenth century municipal bans on horseless carriages, a response to public fears of accidents and pollution. After cities redesigned roads to encourage new forms of trasnport, especially trolley cars, light carriages, and bicycles, the bans disappeared in the 1890s. With the advent of the automobile, metropolitan elites quickly and permanently established cars as status symbols. Down the Asphalt Path also explains the escapist appeal of the motor car to many Americans constrained by traditional social values.

This book includes more than thirty photographs detailing the transformation of urban transportation. They bring to life chapters on modes of travel before the trolley; the push for parks, parkways, and suburbanization; the car in popular culture; and the battle for traffic safety and regulation. McShane's analysis of gender relations in the rise of automobility—in particular, definitions of gender in terms of mechanical skill and of driving as male power—is both timely and innovative.

Wonderfully readable, this book will be a treasure for readers of urban history, popular culture, and technology—as well as car buffs.