Medieval Fantasies of the Perfect Life 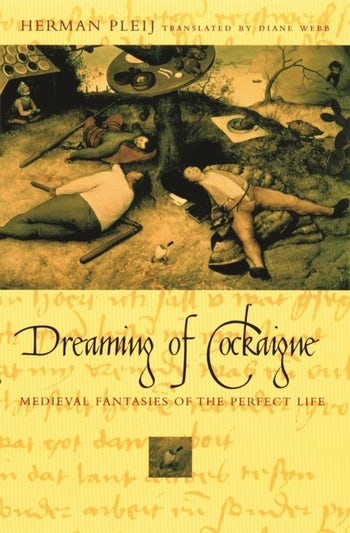 Medieval Fantasies of the Perfect Life

Imagine a dreamland where roasted pigs wander about with knives in their backs to make carving easy, where grilled geese fly directly into one's mouth, where cooked fish jump out of the water and land at one's feet. The weather is always mild, the wine flows freely, sex is readily available, and all people enjoy eternal youth.

Such is Cockaigne. Portrayed in legend, oral history, and art, this imaginary land became the most pervasive collective dream of medieval times-an earthly paradise that served to counter the suffering and frustration of daily existence and to allay anxieties about an increasingly elusive heavenly paradise.

Illustrated with extraordinary artwork from the Middle Ages, Herman Pleij's Dreaming of Cockaigne is a spirited account of this lost paradise and the world that brought it to life. Pleij takes three important texts as his starting points for an inspired of the panorama of ideas, dreams, popular religion, and literary and artistic creation present in the late Middle Ages. What emerges is a well-defined picture of the era, furnished with a wealth of detail from all of Europe, as well as Asia and America.

Pleij draws upon his thorough knowledge of medieval European literature, art, history, and folklore to describe the fantasies that fed the tales of Cockaigne and their connections to the central obsessions of medieval life.

A very useful study, published with high production values, this book is distinguished by the huge amount of information it contains, clear organization, accessibility (thanks to Webb's fine translation...) and the array of artwork included... The book is an excellent example of the scholarly benefits of concentration on primary sources. Choice

A serious and even ponderous scholarly study... [with] rigorous textual, paleographical and stylistic analysis... [and including] such interesting points as that modern-day supermarkets' unlimited abundance and vacation packages promising paradise on earth have succeeded in making this mythical land a reality. Publishers Weekly

Following in the footsteps of Huizinga, Pleij makes a daring attempt to provide a complete picture of medieval life in the Netherlands. The result is a rich, at times cinematic, panorama of dreams and reality in the Middle Ages. NRC Handelsblad

[A] remarkable book, a scholarly and sumptuous discussion of once-upon-a-time fantasies of the perfect life... rich, learned, witty, and admirably readable. The New Republic

[A] compelling account of the experiences and beliefs of the middle ages.... Pleij's analyses extract much poignancy from material that may initially seem merely whimsical. The Guardian

In this entertaining book [Pleij] trawls the medieval Cockaigne literature, partly to display its riches of fantasy and absurdity, and partly to investigate its purposes... There is an abundance of funny and striking information in Pleij's book, and its broad liberal sensibility rests on solid foundations of scholarship. Financial Times

[A]nything Pleij writes in his native Dutch is a joy to read. Diane Webb's exrtemely smooth translation does proper justice to Pleij's prose, and her renditions of the Middle Dutch texts that form the core of this study deserve high praise. In sum, if Huizinga is truly the founder of Dutch cultural studies, then Pleij has demonstrated with this book that he is a worthy successor to the same cause. David F. Johnson, Speculum

Herman Pleij lectures on Dutch historical literature at the University of Amsterdam. He is the author of the Dutch best-seller Het Gilde van de Blauwe Schuit(The guild of the blue barge), an account of the rituals surrounding the celebration of Carnival in the Middle Ages, and the critically acclaimed book De sneeuwpoppen van 1511(The snowmen of 1511), a lively study of the rise of urban culture and middle-class morality in the southern Netherlands of the late Middle Ages.