Ecological Economics for the Anthropocene 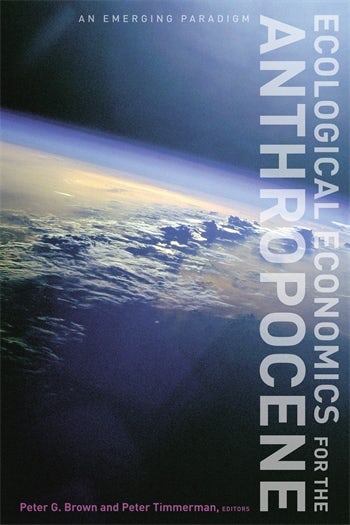 Ecological Economics for the Anthropocene

Ecological Economics for the Anthropocene provides an urgently needed alternative to the long-dominant neoclassical economic paradigm of the free market, which has focused myopically—even fatally—on the boundless production and consumption of goods and services without heed to environmental consequences. The emerging paradigm for ecological economics championed in this new book recenters the field of economics on the fact of the Earth's limitations, requiring a total reconfiguration of the goals of the economy, how we understand the fundamentals of human prosperity, and, ultimately, how we assess humanity's place in the community of beings.

Each essay in this volume contributes to an emerging, revolutionary agenda based on the tenets of ecological economics and advances new conceptions of justice, liberty, and the meaning of an ethical life in the era of the Anthropocene. Essays highlight the need to create alternative signals to balance one-dimensional market-price measurements in judging the relationships between the economy and the Earth's life-support systems. In a lively exchange, the authors question whether such ideas as "ecosystem health" and the environmental data that support them are robust enough to inform policy. Essays explain what a taking-it-slow or no-growth approach to economics looks like and explore how to generate the cultural and political will to implement this agenda. This collection represents one of the most sophisticated and realistic strategies for neutralizing the threat of our current economic order, envisioning an Earth-embedded society committed to the commonwealth of life and the security and true prosperity of human society.

In Ecological Economics for the Anthropocene, ecological economists ask whether their insights are unfinished, as problematic as they are promising. Their challenges are provocative and insightful. With the planet in jeopardy, sustaining community and saving the biosphere is as vital, and morally required, as sustaining growth. Holmes Rolston III, Colorado State University

Ecological Economics for the Anthropocene is about the relationship between life and the world that supports it. Three basic concepts—membership, householding, and entropic thrift—are used to explain this relationship and to demonstrate the strong connection between ecological economics and justice. Herman E. Daly, University of Maryland

A nuanced and quite interesting set of contributions concerning the ethical dimensions of ecological economics, providing a transdisciplinary vision for governing the economy as an embedded subsystem of social and ecological systems. Richard Howarth, Dartmouth College

We urgently need both a new ethic and a new economics to guide us into the Anthropocene Age. This timely collection underscores the challenges that any new ecological economics must overcome. It offers many rich resources, drawn from an impressively diverse range of disciplines, traditions, and cultures, to help philosophers, economists, and others as we try to imagine how life in the Anthropocene will transform our moral and economic thinking. Tim Mulgan, University of St Andrews and University of Auckland, author of Ethics for a Broken World

Read the introduction, "THe Unfinished Journey of Ecological Economics":

Peter G. Brown is a professor in the School of Environmental Studies at McGill. He is the principal investigator of Economics for the Anthropocene: Re-grounding the Human/Earth Relationship, a partnership among McGill University, the University of Vermont, and York University. He is also a member of the Religious Society of Friends (Quakers) and the Club of Rome.

Peter Timmerman is an associate professor in the Faculty of Environmental Studies at York University. Among his wide-ranging research interests are climate change, environmental ethics, nuclear-waste management, and religion and the environment, specifically the Buddhist tradition.