From the Worlds of the Samurai to the Vengeful Female Ghost 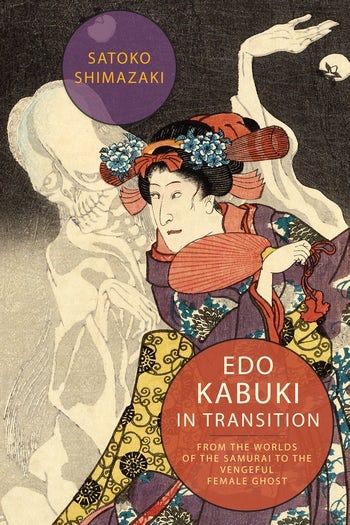 From the Worlds of the Samurai to the Vengeful Female Ghost

Satoko Shimazaki revisits three centuries of kabuki theater, reframing it as a key player in the formation of an early modern urban identity in Edo Japan and exploring the process that resulted in its re-creation in Tokyo as a national theatrical tradition. Challenging the prevailing understanding of early modern kabuki as a subversive entertainment and a threat to shogunal authority, Shimazaki argues that kabuki instilled a sense of shared history in the inhabitants of Edo (present-day Tokyo) by invoking "worlds," or sekai, derived from earlier military tales, and overlaying them onto the present. She then analyzes the profound changes that took place in Edo kabuki toward the end of the early modern period, which witnessed the rise of a new type of character: the vengeful female ghost.

Shimazaki's bold reinterpretation of the history of kabuki centers on the popular ghost play Tokaido Yotsuya kaidan (The Eastern Seaboard Highway Ghost Stories at Yotsuya, 1825) by Tsuruya Nanboku IV. Drawing not only on kabuki scripts but also on a wide range of other sources, from theatrical ephemera and popular fiction to medical and religious texts, she sheds light on the development of the ubiquitous trope of the vengeful female ghost and its illumination of new themes at a time when the samurai world was losing its relevance. She explores in detail the process by which nineteenth-century playwrights began dismantling the Edo tradition of "presenting the past" by abandoning their long-standing reliance on the sekai. She then reveals how, in the 1920s, a new generation of kabuki playwrights, critics, and scholars reinvented the form again, "textualizing" kabuki so that it could be pressed into service as a guarantor of national identity.

This fascinating book on historical kabuki is a must-read for students of that theatrical form and is recommended to anyone interested in the popular culture of Japan’s Edo period. Journal of Japanese Studies

Satoko Shimazaki's fascinating study of early modern kabuki performance reveals a new kabuki theater to us, not a cultural practice with a relatively stable body of texts at its center but a major site of social and cultural negotiation whose central feature and strength lies in its remarkable variety and adaptability. Marvin Carlson, author of The Haunted Stage: The Theatre as Memory Machine

Edo Kabuki in Transition is an extraordinary contribution to the field of kabuki studies, in both the West and Japan. Its unconventional yet comprehensive view of Edo kabuki's evolution, especially its playwriting practices, filtered through the lens of Tsuruya Nanboku IV's 1825 coproduction of his revolutionary ghost play Yotsuya kaidan and the popular history play Chushingura, is original and searching. Satoko Shimazaki's highly readable, marvelously researched study gives us both a penetrating understanding of the fluidity of Edo dramaturgy and an exceptionally thorough examination of the ghost play genre. Samuel L. Leiter, author of The Art of Kabuki: Five Famous Plays

This fascinating book is a bold revisioning of the development of kabuki theater in Edo (present-day Tokyo).... Highly recommended. Choice

This is a work of extraordinary scholarship and exemplary writing that makes an outstanding contribution to our understanding of the nature of kabuki's creativity. . . . It will be of deep interest to scholars of Japanese theater, early modern literature, authorship, and gender, and its accessible style and clarity should help it find a welcome place on undergraduate syllabi as well. Journal of Japanese Language and Literature

Drawing not only on play scripts but also medieval literature, theatrical ephemera, and other records and accounts, Shimazaki’s argument is well researched, well referenced, and well formed. Japanese Studies

A major work of scholarship. . . . Shimazaki expands the boundaries of studies on kabuki and Japan’s early modern period in general. Asian Theatre Journal

Satoko Shimazaki’s Edo Kabuki in Transition explores what is arguably a more significant female kabuki archetype, one identified in the book’s very subtitle: the vengeful female ghost. . .Shimazaki adroitly excavates the layers of meaning and association beneath each element of Nanboku’s vision. William D. Fleming, TDR: The Drama Review

The book is a fascinating mix of the informative and is scattered throughout with some obscure historical eyebrow raising facts. Japan Society Review

Satoko Shimazaki is associate professor of early modern Japanese literature and theater at the University of California, Los Angeles.